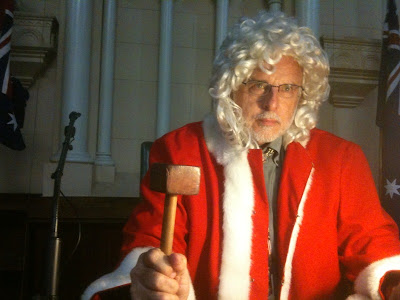 It’s a well reasoned and carefully thought out ruling.  I can’t in the space available here, get into every nuance of the 65 page decision.  So, please consider this a very general overview.  First Judge Vinson clearly delineated the scope of his job as judge.  From the decision:

For purposes of this case, it matters not whether the Act is wise or unwise, or whether it will positively or negatively impact healthcare and the economy. Nor (except to the limited extent noted in Part III.A(7) infra) am I concerned with the manner in which it was passed into law. My review of the statute is not to question or second guess the wisdom, motives, or methods of Congress. I am only charged with deciding if the Act is Constitutional. If it is, the legislation must be upheld —- even if it is a bad law... Conversely, if it is unconstitutional, the legislation must be struck down —- even if it is a good law.

Yes! The judge didn’t finally decide the case, of course. But he did highlight some of the issues that will be germane.

First: Is the fine for non purchase of insurance a penalty, as seems to be the case from my chair, or a “tax,” as the Obamacare defenders now claim. This is an important question because it will be easier to toss a penalty as unconstitutional, than a tax.  The court determined that it appears to be a penalty, because:

And here’s some very good language on that issue (p.28):

Congress should not be permitted to secure and cast politically difficult votes on controversial legislation by deliberately calling something one thing, after which the defenders of that legislation take an “Alice-in-Wonderland” tack9 and argue in court that Congress really meant something else entirely, thereby circumventing the safeguard that exists to keep their broad power in check.

That thrills me, and not just because of this ruling but because of the continual legislative corruption we see, such as claiming to outlaw human cloning when it is actually being explicitly permitted via the ruse of a biologically false definition.  It is about time that someone in authority called Congress out for the mendacity!

The Court then ruled that individual plaintiffs and states have standing to bring suit on some, but not all counts of the lawsuit.  The court dismissed the claim that the employer mandates under the law are unconstitutional.  Ditto the claim that the states were being coerced to create insurance exchanges. The Court permitted the claim to be brought that the new Medicaid rules under Obamacare are “coercion,” although seemed to state that the theory is shaky. I won’t belabor that those arcane issues here.

The big enchilada, of course, is whether the individual mandate imposed on all of us to buy insurance if we are not otherwise covered exceeds the power of the Federal Government under the Commerce Clause. The Court ruled—and this is huge—that the challenge may go forward:

At this stage in the litigation, this is not even a close call...But, in this case we are dealing with something very different. The individual mandate applies across the board. People have no choice and there is no way to avoid it. Those who fall under the individual mandate either comply with it, or they are penalized. It is not based on an activity that they make the choice to undertake. Rather, it is based solely on citizenship and on being alive. As the nonpartisan CBO concluded sixteen years ago (when the individual mandate was considered, but not pursued during the 1994 national healthcare reform efforts): “A mandate requiring...all individuals to purchase health insurance would be an unprecedented form of federal action. The government has never required people to buy any good or service as a condition of lawful residence in the United States.”


Of course, to say that something is “novel” and “unprecedented” does not necessarily mean that it is “unconstitutional” and “improper.” There may be a first
time for anything. But, at this stage of the case, the plaintiffs have most definitely stated a plausible claim with respect to this cause of action.

In this order, I have not attempted to determine whether the line between Constitutional and extraconstitutional government has been crossed. That will be decided on the basis of the parties’ expected motions for summary judgment, when I will have the benefit of additional argument and all evidence in the record that may bear on the outstanding issues. I am only saying that (with respect to two of the particular causes of action discussed above) the plaintiffs have at least stated a plausible claim that the line has been crossed.

This case is going to trial—Yeeha!—and all of these cases are heading to the Supreme Court of the United States. If I were to lay a bet on the ultimate outcome, I would say Obamacare’s mandatory purchase mandate falls on a 5-4 or 6-3 vote.

(Photo by Secondhand Smokette of me playing a “hanging judge” in a tourist sketch in Melbourne, Australia).
0
Print
Email
Prev Article
Next Article