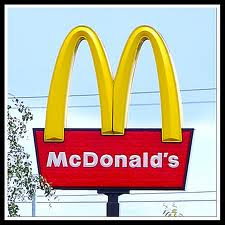 What a joke.  Last week there were reports that McDonald’s was going to drop its employees from health insurance coverage because Obamacare would increase the company’s costs.  This was roundly denied at the time, but now, guess what?  The bureaucrats have exempted McDonald’s and other companies—not to mention a big teacher’s union—from the rules that were supposed to protect us all.   From the story:

Nearly a million workers won’t get a consumer protection in the U.S. health reform law meant to cap insurance costs because the government exempted their employers.Thirty companies and organizations, including McDonald’s (MCD) and Jack in the Box (JACK), won’t be required to raise the minimum annual benefit included in low-cost health plans, which are often used to cover part-time or low-wage employees. The Department of Health and Human Services, which provided a list of exemptions, said it granted waivers in late September so workers with such plans wouldn’t lose coverage from employers who might choose instead to drop health insurance altogether.Without waivers, companies would have had to provide a minimum of $750,000 in coverage next year, increasing to $1.25 million in 2012, $2 million in 2013 and unlimited in 2014.

This is only the beginning, because once you start exempting too-big-to-fail type companies, others will demand to follow.  And the government has demonstrated it can be rolled.  Of course, there was a political purpose—imagine the impact on the election of McDonald’s canceled its health insurance:

What a hoot: The only way to keep Obamacare politically viable is to exempt the biggest employers from its provisions.

Obamacare: Only binding on the little guys!  I said it was a joke, but I was wrong. It’s a farce. It needs to be scrapped and a more modest and doable law put in its place.
0
Print
Email
Prev Article
Next Article