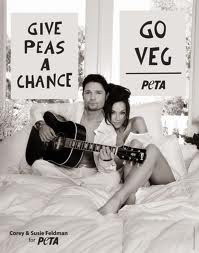 The Animal Liberation Front likes to compare itself to Martin Luther King and Ghandi.  PETA calls them the moral equivalent of the French Resistance and the Underground Railroad.

Yup, those example really popped into my mind when I read that some ALF terrorists sent what they said were HIV-tainted razor blades to a UCLA animal researcher. From the story:

The FBI and University of California at Los Angeles police are investigating a new round of threats from anti-animal research activists who say they sent AIDS-tainted razor blades and a threatening message to a research professor, a university spokesman said Tuesday. The university said law enforcement officials confirmed that UCLA neuroscientist David Jentsch received a package at his home containing razor blades and a threatening note. No other details about the package or its contents were given by the university.

All we are saying, is give peace a chance!
0
Print
Email
Prev Article
Next Article