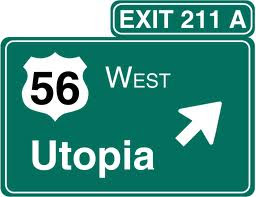 I am sometimes asked what I mean by “global warming hysteria,” which is a different thing than whether, and to what extent, human activity might be—or is—warming the climate.  Perhaps this post will help explain.

Leaving aside the anti-humanism that leavens the movement, radical environmentalist environmentalism—of which global warming hysteria is one wing—is dangerous in my view, not because it wants a cleaner planet, but because it is Utopian. Utopianism is among humankind’s most dangerous impulses as it divides the world into pure “good” and “evil,” in which the purity of the desired ends can all too easily justify whatever means—and little things like human freedom can come to be deemed luxuries that we simply cannot afford in the “current crisis.”

I bring this up because “Planet Gore” over at NRO’s The Corner clued me into an interview with Bobby Kennedy, Jr..  Kennedy is one of the most hysterical of the hysterics, and in an interview with a publication called Grist, he reveals his inner Utopian. First, he calls for the EPA to impose policies by fiat that haven’t passed democratic muster.  From “Coup d’etat Against the Carbon Cronies:”

Well, the Supremes unwisely ruled that carbon dioxide could be treated as a pollutant by the EPA.  But that doesn’t mean the EPA was granted the constitutional power to destroy the old energy industries (and not coincidentally, kill jobs).   But that’s essentially what Kennedy is advocating: Destroying profitability by not allowing the companies to raise prices despite imposed higher costs by the government.  How would that reduce energy consumption?  It wouldn’t. It would just obliterate an economically crucial area of the economy based on hysterical ideological hatred.

But not to worry. It will all be replaced by all of us producing our own power.  How?  Magic wand policy making!  Abracadabra!

Then the administration needs to help construct a national grid system that functions as a marketplace for renewable power. We need a marketplace that turns every American into an energy entrepreneur and every home into a power plant, that powers our country on what Franklin Roosevelt called “America’s industrial genius.” We need a national program like Eisenhower launched in the 1950s and 60s to reconstruct our highway system and have it reach every community in the country...That three-quarters of a trillion dollars a year we’re now sending out of the country to pay for our oil addiction, if you just spent a fraction of that building a national grid in this country, we could be off of foreign oil overnight.

Overnight?  Perhaps in decades.  And all of that creation of a new grid will cost how much and will be paid for with what money we don’t have?

Nothing wrong with the general goal, but it is far more complex than building highways (that people like K would now oppose in any event).  In the meantime, we need cheap and abundant energy that is there, but people like Kennedy keep us from accessing much of it.

And he speaks in ways that show how radical environmentalism has become a religion:

Right now we have a marketplace for energy in this country that is rigged by rules that were written by the incumbents to favor the dirtiest, filthiest, most poisonous, most destructive, most addictive fuels from hell, rather than the cheap, clean, green, abundant, and wholesome fuels from heaven.

Kennedy also seems to be saying that because the people have so far rejected his agenda, that equals a “collapse of democracy:”

National climate policy is ultimately a victim of the national political calamity. What we’re looking at is the tragic collapse of American democracy.

But most of this is mere hysteria:

What a farce the Tea Party is. It’s a farce that is based completely on ignorance. The American press is covering it like a horse race rather than exposing it as the charade it really is, rather than exposing all of the claims and suppositions and precepts and slogans as fraudulent. Journalists are supposed to tell the truth. They’re not just supposed to report on different points of view if those points of view have no legitimacy. If a journalist wants, he can report the outlandish opinions of every crank and nutcase out there. There are people out there still who believe the Earth is flat and the Apollo moon landing was a hoax. Why not have them on TV every night?

In other words, he wants the media to be biased in favor of his perspectives.  Earth to Kennedy—most already are.

Kennedy rants and raves about how the answer is democracy, but refuses to understand that democracy has rejected his brand of radical environmentalism.  We’re all just stupid and misinformed by the propaganda of the fat cats, unlike wise progressives like him.

Kennedy clearly would impose his policy desires if he could, regardless of what the people actually think.  And of course, he was notoriously (and typically, see Al Gore, James Cameron, etc.) hypocritical opposing a wind farm that would be visible from the family’s Cape Cod compound.

Other than being the son of a great man, I don’t think Kenedy brings very much to the party.  But he does provide a pretty good illustration of what I mean by “global warming hysteria.”
0
Print
Email
Prev Article
Next Article