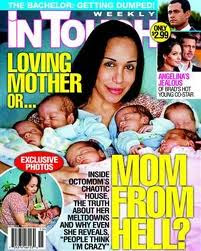 I have always believed that Octomom’s (Nadya Suleman) doctor didn’t do anything that other IVF doctors don’t sometimes do, that is implant six embryos.  It appears, however, that he got carried away, in one attempt implanting 12.

Still, I think that his biggest crime, for which his medical license is now at risk, was to embarrass the sector because Suleman chose to carry all of her 8 babies to term rather than abort some of them, a routine procedure in IVF practice euphemistically known as “selective reduction.”  In other words—and boy, is this ironic—abortion is a normal part of IVF infertility treatments.

That appears to be the case.  From the story in the LA Times:

Dr. Jeffery Steinberg, an Encino-based fertility specialist, testified Wednesday at a hearing held before Administrative Law Judge Daniel Juarez in downtown Los Angeles, the most recent in a series of hearings related to Kamrava’s medical practices. Steinberg said he spoke with Kamrava and reviewed his records. He said he found the records justified Kamrava’s aggressive treatment of Suleman because she had fertility problems and Kamrava had a low success rate at getting patients pregnant. Those aggressive treatments included implanting Suleman with six embryos in 2006, when she became pregnant with twins...

But Steinberg, who has been practicing for 35 years and treats 200 to 480 patients annually, said many of his patients want to become pregnant with multiple babies in order to have large families. “In our eyes, those embryos belong to the patients and they have to make decisions about them,” Steinberg said. Kamrava has said he counseled Suleman about reducing the number of fetuses and attempted to follow up with her after she became pregnant, but was unable to reach her. “Fetal reduction remains as our safety net with in vitro fertilization,” Steinberg said. “We counsel them in advance about options and alternatives and ways to manage, and that’s essentially what went on here.”

I recall speaking several years ago at a bioethics conference in Banf.  A Canadian bioethicist complained that the government didn’t pay for some aspects of IVF (I don’t recall the specifics), and then noted that abortion was a necessary part of IVF, stating, “We turn triplets into twins.”  In my comments, I said that I thought we should be honest about these things, not euphemistic. Thus, the triplets weren’t really turned into twins: They remained triplets with one dead sibling.

It seems to me that Steinberg’s testimony reflects a deprofessionalization of  medicine within the sector by turning fertility physicians into mere order takers.  Indeed, we now see that practitioners can’t legally restrict their practices to infertile married couples in order not to be discriminatory.  More to the point, consider the crass view of embryos and fetuses these practices reflect, as basically fungible produce until they are born. After all, if we can make as many new human lives as we want, and destroy the “excess” with impunity, it means that none of then had intrinsic dignity nor were they considered unique beings. In such cases, survival primarily depends on where the fetus is being carried in the womb.

It doesn’t have to be this way. Italy, for example, allows only 3 embryos to be made at a time for IVF and requires implantation of all successfully created.  That results in no selective reduction as a normal part of IVF pregnancy and no hundreds of thousands of excess embryos to be turned into mere instrumentalities, a mere resource ripe for the harvest.

So, mass creation, implantation, and abortion aren’t necessary to IVF practice. Rather, they are expedient—on several levels.  Those are two different things.

Update: I changed the original headline because it didn’t really express the point of the post, which is this: IVF is essentially an unregulated field in the USA. As a consequence, doctors regularly introduce more embryos than are wanted, with the advice—as occurred in the Suleman case—that if too many implant, some will be aborted.

Suleman’s doctor implanted 12 embryos (apparently), of which eight implanted.  That is unusual, according to Steinberg.  But had she decided to abort six, I firmly believe that the doctor would not be up on charges.  Instead, she chose to have eight babies, creating an international sensation.  That embarrassed the IVF industry and led, I believe to the administrative charges filed against him.  As Dr. Steinberg said, it is an on demand kind of business for some of the doctors engaged in it, with abortion as the back up.  And we have discussed previously, the role of pre-implantaton genetic diagnosis, which moves us toward designer babies, as those deemed unfit or undesirable, are discarded as medical waste.  In the way we have done IVF, in our desire to help people with fertility issues, in our advocacy for a fundamental right to procreate, whenever and however we want, I believe we opened a Pandora’s box.
0
Print
Email
Prev Article
Next Article