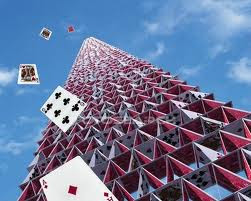 This story stunned me: It is SOP for legislators to put a “severability clause” into legislation, so that if part of a law is found unconstitutional, the rest of it can remain in effect.  But Obamacare has no such clause. This could have the most profound consequences.

Lack of severability means the entire law could fall if the mandatory purchase requirement is found unconstitutional—as seems likely either in Virginia or Florida—and could remain enjoined pending the couple of years time it takes to make it to the Supreme Court.  From the NY Times story:

Mr. Cuccinelli and the plaintiffs in the Florida case, who include attorneys general or governors from 20 states, have emphasized that Congressional bill writers did not include a “severability clause” that would explicitly protect other parts of the sprawling law if certain provisions were struck down. An earlier version of the legislation, which passed the House last November, included severability language. But that clause did not make it into the Senate version, which ultimately became law. A Democratic aide who helped write the bill characterized the omission as an oversight.

If the mandatory purchase requirement is overturned, the question would then be what the legislators intended. In my view, that could go either way:

Without such language, the Supreme Court, through its prior rulings, essentially requires judges to try to determine whether Congress would have enacted the rest of a law without the unconstitutional provisions. The Justice Department, which represents the Obama administration, acknowledges that several of the law’s central provisions, like the requirement that insurers cover those with pre-existing conditions, cannot work unless both the healthy and the unhealthy are mandated to have insurance. Otherwise, consumers could simply buy coverage when they needed treatment, causing the insurance market to “implode,” the federal government asserts.

Severability or no severability, I think if one of these trial judges rules against mandatory purchase, Obamacare, as it now exists, could fall before it got to the Supremes. Given that the mandatory purchase clause is the linchpin of the Obamacare system’s financial viability, if it is invalidated, Congress couldn’t responsibly wait two years for the final judicial ruling.  It would have to step in well before with a substantial revision—perhaps even start from scratch.  And this time, the House and Senate would be substantially anti-Obamacare.  With the next presidential election bearing down, perhaps even the president would go along.

Such are the consequences of pushing a profoundly unpopular and too complicated law through an ideological Congress in such a corrupt and Machiavellian manner.
0
Print
Email
Prev Article
Next Article