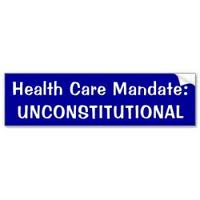 Despite the laudable intentions of Congress in enacting a comprehensive and transformative health care regime, the legislative process must till operate within constitutional bounds. Salutatory  goals and creative drafting have never been sufficient to offsent an absence of enumerated powers...Congressional findings, no matter how extensive, are insufficient to enlarge the Commerce Clause powers of Commerce.

Judge Hudson discusses several cases that set the “outer boundaries of the Commerce Clause power, at pages 21-22 (my emphasis):

In both cases, the activity under review was the product of a self-directed affirmative move to cultivate wheat or marijuana. This self initiated change of position voluntarily placed the subject within the stream of commerce.  Absent the step, government regulations could have been avoided.

In other words, at its most encompassing point, the private economic activity that the government regulated was initiated voluntarily by the person regulated.  Or to put it another way, the cultivators of wheat and marijuana respectively did not grow their crops because they were instructed to by the government.  That is a factual difference that constitutes a crucial legal distinction—unless a negative can be construed as a positive.  (Thank goodness this case didn’t arise in the Ninth Circuit!) From page 23 (again, my emphasis):

In surveying the legal landscape, several operative elements are commonly encountered in Commerce Clause decisions. First, to survive a constitutional challenge the subject matter must be economic in nature and affect interstate commerce, and second, it must involve activity. Every application of Commerce Clause power found to be constitutionally sound by the Supreme Court involved some form of action, transaction, or deed placed in motion by an individual or legal entity.  The constitutional viability of the Minimum Essential Coverage Provision in this case turns on whether or not a person’s decision to refuse to purchase health insurance is such an activity...(p.24) Neither the Supreme Court nor any federal circuit court of appeals has extended Commerce Clause powers to compel an individual to involuntarily enter the stream of commerce by purchasing a commodity in the private market.

Because the purchase mandate is “beyond the historic reach” of the Commerce Clause, it can only be based on an enumerated power.  (No penumbras, here!)  The Government argued that it can be found in the general taxation power, meaning that the fines for not purchasing insurance are really a tax rather than a penalty (despite the POTUS’s many assertions during the debate to the contrary).  Judge Hudson disagreed, beginning at the bottom of page 32:

The only revenue generated under the Provision is incidental to a citizen’s failure to obey the law by requiring the minimum level of insurance coverage. The resulting revenue is “extraneous to any tax need” [citation omitted].  Compelling evidence of the intent of Congress can be found in the Act itself.  In the preface to section 150, Congress specifically recites the constitutional basis for its actions and includes findings of fact. “The individual...[mandate] is commercial and economic in nature, and substantially affects interstate commerce...”

[p. 34] In the final version of the ACA enacted by the Senate on December 24, 2009, the term “penalty” [in earlier versions of the legislation] was substituted for “tax” in section 150(b)(1). A logical inference can be drawn that the substitution of the critical language was a conscious and deliberate act on the part of Congress.  This shift in terminology during the final hours preceding an extremely close floor vote undermines the contention that the terms “penalty” and “tax” are synonymous.

Placing the purchase mandate in the Internal Revenue Code under “miscellaneous excise taxes” doesn’t make it so, (starting at 35):

This Court is therefore unpersuaded that section 1501(b)(1) is a bona fide revenue raising measure enacted under the taxing power of Congress...[p. 36] Having concluded that Section 1501(b)(1) is, in form and substance, a penalty as opposed to a tax, it must be linked to an enumerated power other than the General Welfare Clause...It is clear that the...underlying regulatory scheme was conceived as an exercise of the Commerce Clause powers.  [p. 37] Earlier in this opinion, the Court concluded that Congress lacked power under the Commerce Clause...to compel an individual to involuntarily engage in a private commercial transaction...The absence of a constitutional viable exercise this enumerated power is fatal to the accompanying sanction for non compliance.

On careful review, this Court must conclude that Section 1502 of the Patient Prevention Affordable Care Act—specifically the Minimum Coverage Provision—exceeds the constitutional boundaries of congressional power.

Demonstrating judicial restraint, Hudson severed the mandatory purchase mandate from the rest of the Obamacare law, “following the time-honored rule to sever with circumspection.”  Thus, the rest of Obamacare remains in effect, although it seems to me that it’s heart has been removed.  Also, he did not issue an injunction because “irreparable harm” is not currently threatened, given that the unconstitutional provision will not become effective until 2014.  I think that was the right decision from a legal POV, although politically, I wish the court could have stopped the bureaucracy in its tracks.

The reasoning, care, judicial restraint, and logical progression of Judge Hudson’s decision seems legally unassailable.  I think it will have tremendous influence with the Justices when it reaches the Supreme Court, and as I stated earlier, I believe it is the first nail in Obamacare’s coffin, which even its most ardent supporters must acknowledge is seriously ill.
0
Print
Email
Prev Article
Next Article