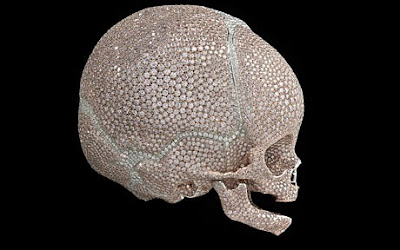 At its best, art expresses a culture’s best virtues, greatest beauty. But these days, art is more often lauded—or at least given attention—if it is unintelligible, pornographic, subversive, disrespectful, and/or denigrates cherished values or religious traditions.

One such value is the respectful way in which dead human bodies are supposed to be treated. We respect the dead because it is a way of respecting the lives that were lived in those bodies, and more broadly, the importance of being human.  Hence, we hear calls for Native American skeletons on display to be taken down and returned to the deceased person’s people for proper burial or cremation.  We display mummies, true. But not in a way that denigrates their lives.  Quite the opposite, in fact: It is more a matter of awe. Ditto, the bodies we see in Pompeii. In this regard, context is everything.

But now an arteest has used a dead baby’s skull as “art.”  From the story:

Damien Hirst has been accused of insensitivity for using a baby’s skull studded with 8,000 diamonds for his latest art work. The skull, which is believed to be that of a child who died before it was two weeks old, is cast in platinum and studded with more than 8,000 pink and white diamonds by the royal jewellers Bentley & Skinner. It was part of a 19th-century pathology collection acquired by the artist, who made his name with dissected sharks and pickled sheep.

Sally Russell, who founded the parenting group Netmums, says it is offensive to bereaved parents: “Mr Hirst may not have intended to be insensitive, but it will have a profound effect on many people who will find the subject deeply disturbing.”...

The work will go on display later this month as part of an exhibition of new paintings and sculptures by the artist at the Gagosian gallery’s exhibition space in Hong Kong. It is expected to go on display in London later this year. The gallery declines to comment on its price.

When human bodies are plasticized and put on display as if they were having sexual intercourse, and a baby’s skull is studded with diamonds, it isn’t art. It is a nihilistic and decadent disrespect for the dead—which in a sense, means all of us, since we are all headed in the same direction—that speaks, I fear, of a deepening darkness in the culture.