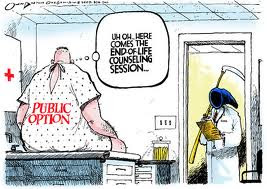 The new regulation compensating doctors who discuss end of life care with Medicare patients during their yearly physicals, continues to make news.  I was interviewed for one such article by the Pittsburgh Tribune Review.  The reporter was very attentive and quoted me correctly, which is always nice.  And it is interesting to see what survives the cutting room floor from a 30 minute conversation.

The article generally concerns the issue of advance directives.  I explained to the reporter that I do not recommend “living wills” because they give power to a doctor you might not even know—such as a hospitalist who you have never met—to interpret the means and context of your desires expressed in the document, which sets your choices in stone even though your views might have shifted since signing. I do strongly support the durable power of attorney for health care because that approach allows you to pick your surrogate decision maker, who presumably, will be someone you trust and who knows your values.  Some of the nuances of what I said didn’t make the story, I am sure due to space considerations.  I also explained why the regulation is causing less uproar than the original legislative proposal.  From the article:

The documents [Me:  “living wills”] could lock a person into a decision before they understand the situation, said Wesley J. Smith, a senior fellow in human rights and bioethics at the Discovery Institute, a conservative Virginia-based [Me-actually Seattle] policy group. “You can’t possibly know the circumstances in which you’ll find yourself,” Smith said. Giving someone power of attorney to make treatment decisions if you’re incapacitated offers flexibility, he said.


Part of the annual Medicare checkup is developing an illness prevention plan for each patient, and adding the advance directives discussion will “help the physician to better align the personal prevention plan services with the patient’s priorities and goals,” federal regulators wrote. The compensation makes it more likely that doctors will talk to their patients about advance directives, Smith said, but “I don’t think government needed to get involved in this at all. Is it a matter of major concern?” [because doctors should be talking about this with patients anyway.]


Smith opposed the end-of-life planning provision that Congress dropped from the health care law. People were suspicious that its focus on cost-cutting meant “these counseling sessions could become coercive or persuasive, in terms of pressuring people into not receiving expensive treatments,” he said. “The regulation is far less of a concern to me than the original legislation,” he said. But he’s concerned about the Obama administration using a regulation to implement something Congress rejected.

That general distrust of government and the health care industry is why the debate over end-of-life discussions became so “alarmist,” he said. “I think the fear is that our health care system is becoming increasingly money-driven and utilitarian, that those who are most expensive and have the least ‘quality of life’ should be viewed differently than those who are able-bodied and younger,” Smith said. “That can lead to very nasty consequences.” Smith and others note that an advance directive doesn’t have to be about withholding care.

The best advance directive I have seen is produced by the Patients Rights Council—formerly the International Task Force on Euthanasia and Assisted Suicide (more on the name change soon).  It is called the Protective Medical Decisions Document and is state specific.  It is a form of durable power of attorney for health care, and instructs the surrogate that you are not to be euthanized if it becomes legal, nor have your food and fluids removed based on quality of life. For those whose values accord with the PMDD who would like more information, hit this link.
0
Print
Email
Prev Article
Next Article