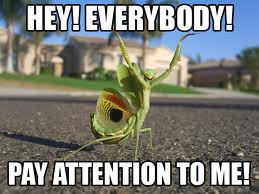 This has President Obama shaking in his boots!  That self aggrandizer, Randall Terry, says he is going to challenge Obama in the Democratic presidential primaries.  From the story:

Pro-life activist Randall Terry announced he will challenge President Barack Obama in a Democratic primary for the sole purpose of running graphic pro-life advertisements on national television during the election year. Terry said he expects to “wound” Obama politically, and told The Daily Caller he plans to do so by airing pro-life advertisements during the 2012 Super Bowl and AFC and NFC championship games. “I want to pummel Obama for his support of child killing,” Terry said in a phone interview. “I’m going to use the Democratic primary as a vehicle to do that. I want to focus like a laser beam on Obama.”

Absolutely, if Terry uses the word “wounded” as a synonym for gaining 5 points in the polls.

If anything, Terry’s entry will help those he claims to oppose.  The media will gleefully hone in on his every fanatical-sounding word—I once heard him essentially espouse theocracy—so as to promote the meme that those who hold pro life views are extreme.

That is what happened in the Terri Schiavo case. When he walked through the door, the NYT, after months of ignoring the story because (in my view) Michael Schiavo looked so bad (having babies with his “fiance” belied his claim to be a loving husband), made it their front page story. And with that, the already uphill fight for the heart and minds of the general public became a vertical cliff.

Make no mistake: This challenge is about one thing; getting Terry attention.  It won’t accomplish anything for the anti abortion cause he espouses.
0
Print
Email
Prev Article
Next Article