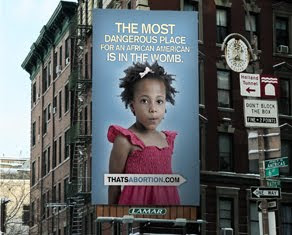 A new billboard in New York City is aimed at reducing abortion within the African-American community. From the story:

The poster advertises a Texas-based group called Life Always, which campaigns against what it calls a “genocidal plot” against unborn babies. It is on display in the SoHo area of Manhattan. On its website, Life Always states: “Abortions among African-American women are three times that of the rest of the population. Over 25 per cent of the next generation is being wiped out as we speak”. Bill de Blasio, the city’s public advocate, described the advertisement as “grossly offensive to women and minorities”. “This billboard simply doesn’t belong in New York City,” said Mr de Blasio.

Well, sure it does. Freedom of speech and all that.

But is de Blasio right in his criticism? I don’t think so. The sign isn’t graphic.  It isn’t saying that African-American women are bad mothers.  It seeks to raise the point that the number of abortions in the African-American community was very disproportionate to their demographic.  The pro life message clearly hopes to change that.

Many pro life leaders have long lamented that the civil rights community is not more engaged in this matter as a civil rights issue, contending that abortion rights groups such as Planned Parenthood “target” African-Americans. (I don’t accept that.  I suspect that the high number of abortion clinics in African-American communities more likely reflects the demand in those communities, rather than constituting a targeting based on racial antipathy.)  Moreover, Dr. Martin Luther King’s niece, Alveda King, is pro life and very active in the cause of reducing abortion in the A-A community. So is Gloria Y. Jackson, the great granddaughter of Booker T. Washington.  Ditto, Lynne M. Jackson, the great, great grandaughter of Dred Scott. (I met all three in 2008.  I was stunned at the depth of emotions I felt talking with these women who represent so much American history in their lineages.)

So, in light of the above—and with the clear intent of the billboard being to persuade pregnant African-American women to give birth rather than terminate their unborn babies—it would seem to be to be the opposite of racially insensitive.  Indeed, doesn’t the sign validate the equality and importance of African-American lives?

One final point: I noticed that all media photos of the billboard cut off the bottom part of the image—or even, didn’t include the text.  I had to go to the sponsors Web site to get the whole image.  Did all these outlets edit for size?  I doubt it.  Perhaps editors didn’t want to give publicity to the group behind it, or perhaps, they hoped to obscure the explicitly anti-abortion message and make it subliminally be aimed at African-American mothers generally.  But it seems to me the entire photo should be shown, which I have done here.
0
Print
Email
Prev Article
Next Article