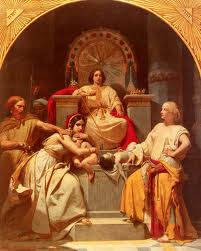 Shades of Terri Schiavo—but without the killing part.  A woman gave birth to triplets five years ago and suffered terrible complications that rendered her with a profound cognitive disability.  A year later the husband divorced her.  Now he is in a fight with her parents over the extent of visitation the children should be allowed with their mother. From the story:

The first two births took place without incident. But as a doctor was delivering Yossi, he accidentally nicked Dorn’s uterus. Before doctors could stop the bleeding, her heart had stopped, a defibrillator they used malfunctioned and her brain was deprived of oxygen. A year later her husband, believing she would never recover, divorced her and is raising their children at his Los Angeles home. Her parents, meanwhile, took her to their Myrtle Beach, S.C., home where they are caring for her.  As the conservators of her estate, they also manage her malpractice settlement of nearly $8 million.

Dorn’s attorney argues that her children should not be denied the crucial opportunity to bond with her as they grow up, even if they can’t have a traditional relationship with her. Thursday’s closing arguments showed a deep division between Dorn’s mother, Susan Cohen, and Dorn’s ex-husband. “She is an unfit grandmother,” Greene said at one point, adding that Cohen wants to take on the role of parent whenever the children visit their mother and to fill them with unrealistic expectations that their mother might recover.

Cohen’s attorney, Meyer, complained that during a December visit, when the children asked to take home a photo of their mother, Cohen gave them each framed pictures that they clutched tightly. But when they got home, she said, their father hid the photos away in a cabinet. “He didn’t want them to know they had a mother,” she said.

The two sides also disagree over just how aware Abbie Dorn is of her surroundings. Her mother has said she communicates through her laughter and tears and can answer yes or no to questions by blinking. A neurologist testified earlier in the hearing that Dorn does seem to try to communicate by blinking but doesn’t do it consistently.

One can’t decide what is best from our arm chairs.  The judge has a tough job.  All things being equal, the judge’s first concern is the welfare of the children.  That is something that is never set in stone but can shift over time.  What might not be good when they are five, might be fine when they are seven or eight.  Second, the mother has the right to see her children—again all things being equal—and that should not be sacrificed because of her disability. Third, in California grandparents also have rights.  And messes are really made when custodial parents and others with vested interests in relationships with children can’t get along. I hope the judge is gifted with the wisdom of Solomon because how this matter goes down could affect the children and their mother profoundly for the rest of their lives.

These tragedies rend families.  When I was actively practicing trial law, I was involved in the case of a young girl who became minimally conscious as a result of terrible medical malpractice (followed by a cover up right out of the movie The Verdict).  The result, in addition to a profoundly disabled girl, was a broken marriage, mother who devoted most of her life to her daughter, a father who detached from his daughter and couldn’t bear emotionally to even speak her name, and a brother who completely tuned out to the whole situation.  (I was profoundly moved by naked humanity of that girl , which, for anyone interested, I discuss in the first chapter of Forced Exit.  It is one reason I have little patience for those whose language and policy prescriptions dehumanize such helpless people)

So, I am not surprised that the family fell apart.  What a shame that in the midst of this terrible tragedy, the parties can’t work together. It would be better for both the children and their mother—who, after all, sacrificed so much in giving them life—if grandma and dad put their mutual hatred aside and worked overtime for the sake of the vulnerable to just get along.