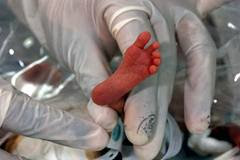 Rationing—which is a direct and unavoidable consequence of single payer health care funding—pits patient groups against each other, each seeking to exclude others from part of the pie so they can get more.  It is a disturbing spectacle.  And media often take sides.

A good example comes out of the UK, where the head of the NHS has said on a BBC Program—called “23 Week Babies: The Price of Life,” that babies at 23 weeks—viability is sometimes possible at 20—should be allowed to die because if they live, they’ll probably be disabled.  From the story:

Babies born after just 23 weeks of pregnancy or earlier should be left to die, a leading NHS official has said. Dr Daphne Austin said that despite millions being spent on specialised treatments, very few of these children survive as their tiny bodies are too underdeveloped. She claimed keeping them alive is only ‘prolonging their agony’, and it would be better to invest the money in care for cancer sufferers or the disabled.

Dr Austin, who advises local health trusts how to spend their budgets, said doctors were ‘doing more harm than good by resuscitating 23-weekers’ and that treatments have ‘very marginal benefit’. The NHS spends around £10million a year resuscitating babies born this early and keeping them alive on incubators and ventilators. But despite round-the-clock care from teams of experienced doctors and nurses, just 9 per cent leave hospital – the rest die. And only one in 100 grows up without some form of disability. The most common include blindness, deafness and cerebral palsy

So, rather than let these people live with disabilities, we would rather they died to save money? And shame on her for pitting terminal cancer patients against prematurely born infants.

Note the insidious role of abortion on the Austin’s thinking:

The legal limit for abortion is 24 weeks. Dr Austin said that the care given to such tiny infants should be weighed up in the same way as the NHS decides whether or not to fund treatment for dying cancer patients.

So, since these babies are legally abortable, their lives should be viewed differently if they are born?  This kind of thinking is one reason why the USA passed the Born Alive Infant Protection Act.

People with disabilities have been worried for years that we are returning to the bad old days of devaluing the equal worth of their lives.  When the BBC carries advocacy of this nature, you know that their worries are justified.

A 2000 study found that 46% of 23 week born alive infants survive to leave the hospital. That’s the crucial statistic. The potential for disability should be irrelevant when parents want their babies’ lives sustained.
0
Print
Email
Prev Article
Next Article