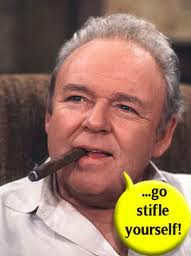 Global Warming Hysteria frequently exhibits an alarming authoritarian streak—oft discussed here.  And now an attempt by East Anglia University to stifle a GWH critic has failed.  From the column, “Climatgate U Loses Bid to Stifle Critic,” by Lawrence Solomon:

The University of East Anglia of Climategate fame – scene of the embarrassing emails that disgraced the global warming cause – has once again been embarrassed, this time through a failed attempt to silence one of the UK’s most brilliant – and biting – global warming sceptics. James Delingpole, a take-no-prisoner blogger with the Daily Telegraph, has been a relentless critic of the university and the professor at the heart of the scandal, Phil Jones. In an attempt to curb Delingpole’s blog posts, the university lodged a complaint with the UK Press Complaints Commission, an independent body. The Commission’s decision, just out, is a crushing repudiation of the university’s attempt to manage dissent that could strike a blow for free speech everywhere.

As an American, I am always stunned that there would even be a press commission, even if industry run, that would have the power to adjudicate the accuracy of stories and force papers to print the results of adjudications.  But back to the article:

It then ruled: “The Commission was satisfied that readers would be aware that the comments therein represented the columnist’s own robust views of the matters in question. … The Commission has previously ruled [North v The Guardian] that ‘In the realm of blogging (especially in cases touching upon controversial topics such as climate change), there is likely to be strong and fervent disagreement, with writers making use of emotive terms and strident rhetoric.  This is a necessary consequence of free speech. The Commission felt that it should be slow to intervene in this, unless there is evidence of factual inaccuracy or misleading statement.’ To see the succinct UK Press Complaints Commission decision, click here.

The more intense the attempts to stifle dissent, the more the side that seeks to avoid criticism generally has to hide.  In a matter of this import, we need more debate—not less.
0
Print
Email
Prev Article
Next Article