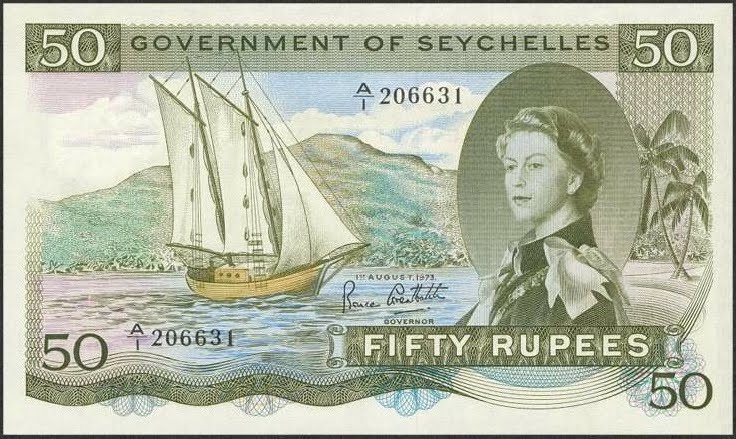 From Shiva Naipaul’s travel essay about the Seychelles, “Fall from Innocence”:

He refers to a fifty-rupee note adorned with a group of emblematic coconut trees. When examined from a certain angle, the fronds patterned themselves into the letters S-E-X. (I was given a tie adorned with the same motif.)


‘This,’ Mancham has written, ‘admirably suited the island of love image which Seychelles had acquired during the Second World War when travelers had turned up to find that much of the male population was absent and the women friendly.’ Under his guidance, the brothel-state was at hand.

Having a dirty-minded president did produce some awkward diplomatic scenes. When Mancham met with Valery Giscard d’Estaing in the ’70s, they spoke of agriculture and trade, tourism and cultural exchange — and oh, yes, “it was agreed that a pornographic film ( Goodbye Emmanuelle ) should be shot in the Seychelles.” I suppose that if you’re going to be a champion of lechery, making it work for your country is better than saying to hell with it and turning into Silvio Berlusconi.