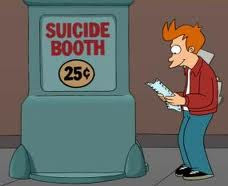 I am confused. A man named Jeffrey Locker wanted to kill himself and paid Kenneth Minor to help do the deed. His reason? He was broke and he wanted the life insurance to help his family. And yet despite having the consent of Locker to be made dead, Minor is going to the penitentiary for 20 years. From the story:

A man convicted of murdering a debt-ridden motivational speaker has been sentenced to at least 20 years in prison in a case that tested the bounds of assisted suicide...The case was unusual for broaching the concept of assisted suicide in the context of strangers staging an apparent street crime. Locker approached Minor on a New York street to ask for help staging his death, both prosecutors and Minor had said. Minor did not testify at his trial but told his account to police when he was arrested...Locker had planned his death, including researching funeral arrangements online, sending his wife an email explaining how to shield and distribute their assets “when I am gone” and buying about $14m in life insurance in his final months to add to the $4m he already had, investigators found.

Minor was a homeless former computer technician with a record of drug arrests. He said he initially balked at Locker’s request but started to feel sorry for him after hearing about his money troubles. Prosecutors said Minor went beyond aiding his suicide by stabbing Locker seven times in his car in East Harlem, New York, miles from his home on Long Island. Minor was arrested a few days later after using Locker’s cash-machine card – his compensation from Locker, he claimed. “This was murder for money, not a mercy killing,” said Manhattan district attorney Cyrus Vance after Minor’s conviction last month.

Why is this injustice being allowed to happen? If we have the “ultimate civil liberty” to choose the “time, manner, method, and reason” for our deaths, what did the Minor do that was wrong?

- The attempt at fraud? That was Locker’s doing, not Minor’s.

- The killing? It was consensual.

- The way it was done? Stabbing is gruesome, to be sure, but that is what Locker wanted and so who are we to judge?

- Receiving money to do the deed? Well, doctors are paid for writing lethal prescriptions in Oregon and Washington and Swiss suicide clinics get paid thousands for helping make people dead.

So, where was the crime?

The crime was in taking the life of another human being. This is a righteous conviction because no one should have the legal right to help make someone else dead—even if that person wants to die. It was murder through and through, and consent is not a defense.

The real question isn’t why Minor was convicted, but why we allow others who may use less brutal methods to get away with what is essentially the same thing, either legally, or even if a crime, to often walk free.

The answer is because many view some of us—the dying, people with serious disabilities, the long-term despairing—as expendable, and others—the healthy and situationally suicidal—(still) as not. But that isn’t logic, it is based on emotional and aesthetic sensibilities. Alas, the “choice” factor and terminal nonjudgmentalism may be gaining ground:

Berkman’s instructions to the jury about New York law surrounding assisted suicide are likely to focus Minor’s appeal. The state allows “causing or aiding” a suicide as a defence to certain murder charges; over Gotlin’s objections, Berkman told jurors that provision could not apply if Minor “actively” caused Locker’s death. That confused jurors about the defence, juror Olympia Moy said in a sworn statement that the defence team filed in court. “If the judge had not instructed us to consider whether Minor’s killing was ‘active’ or not, I would have voted not guilty to murder,” Moy’s statement said, adding that she contacted Gotlin to express her concerns after the verdict.

Wow. The assisted suicide movement is profoundly subverting our belief in the inalienable right to, and intrinsic importance of, human life.
0
Print
Email
Prev Article
Next Article