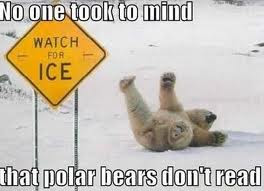 Global Warming Hysteria holds that we should destroy our national sovereignty by handing over our economies to an international, unaccountable technocracy run by the pathetically hapless UN, as we redistribute wealth from the West to pay destitute countries to stay destitute. (See the craziness that was Copenhagen.) We are to do this because “the scientists” have used their computer model crystal balls to see that warming will bring the End of Days if we don’t collapse our carbon release—a remedy that won’t take hold, even if it works, until long after most of us are dead—unless the Singularity brings about a corporeal New Jerusalem. As Al Gore bellows, that warming is “the most serious challenge that our civilization has ever faced!”

The problem is that some of the predictions hysterics have made that could be judged in our own times, have not come to pass, such as the one that UK children by now would barely know what snow is.  Another is that the arctic ice will have melted by now.  Over at Forbes, skeptic James Taylor is on the case.  From “Polar Ice Rapture Misses Its Deadline:”

This week, a 1979 Palm Beach Post article resurfaced in which Steven Schneider, who for the past 30 years was one of the most prominent global warming alarmists, claimed the west Antarctic ice sheet could melt before the year 2000 and inundate American coastlines with up to 25 feet of sea level rise. Obviously, the west Antarctic ice sheet was not raptured away last century, and New Yorkers can still drive rather than swim to work.

Mark Serreze, a researcher with the federally funded National Snow and Ice Data Center, frightened the masses in June 2008 by claiming there was a 50-50 chance the North Pole would be ice-free in the upcoming summer. The media reported Serreze’s prediction with a frenzy rarely equaled even among media-created global warming scares. Adding fuel to the fire, global warming alarmists lined up in droves to add their John Hancock to Serreze’s claim. Many prominent alarmists even claimed Serreze was too conservative with his prediction. For example, Peter Wadhams, head of the Polar Ocean Physics Group at England’s Cambridge University, told the June 27, 2008, London Independent, “People are expecting this [Arctic ice melt] to continue this year and it is likely to extend over the North Pole. It is quite likely that the North Pole will be exposed this summer – it’s not happened before.”

The snows are even returning to Kilimanjaro, which Al Gore wrongly claimed was losing its famous snow due to warming.  Some Himilayan glaciers—you know, the ones that the IPCC once said would be gone by 2035—are actually growing.  Oh, and the polar bear population is stable despite the ridiculous listing of them by our GHW bureaucrats as “threatened.”

In the face of these and other miscues, GWH’s now desperately seize at any severe weather event as proof of global warming.  No snow? Warming!  A lot of snow? WARMING!  Flood?  WARMING!  Tornadoes, hurricanes, earthquakes, volcanoes—WARMING! WARMING! WARMING! WARMING! And the ever compliant media  dance to the tune, as in this Toles cartoon.

But the horrible tornadoes we are now experiencing aren’t caused by warming.  They are not unprecedented.   They are merely extreme weather that afflicts the country periodically, made more dangerous because of the growth of urbanization in Tornado Alley.

In fact, computer models suggest that warming would lead to fewer tornadoes.  Ah, a way out!  It’s another bad prediction by the GWHs, but one that proves global warming!
0
Print
Email
Prev Article
Next Article