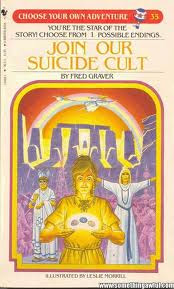 Suicide has become an obsession in certain quarters, and for a few suicide pushers, the basis for a personal cult.  Australia’s Phillip Nitschke is one such cult leader.  Nitschke is a blatant death-on-demander, who has for years pushed suicide machines, the “peaceful pill” suicide concoction that he once opined, in a NRO interview, should be available on supermarket shelves—even to troubled teenagers.

Despite it all, illustrating how the media are attracted to social outlaws like dogs to table scraps, the MSM often (not always) boost his work and treat him with great deference, and even, admiration. (I remember debating him on CNN.  We were both on satellite.  Before we went on the air, we both did a sound check.  The producer gushed, “Dr. Nitschke, thank you, thank you, thank you for being on the show!  We are thrilled to have you.”  To me, “Hello, Mr. Smith. Please say something so we can do a sound check”  Ha!  For my sound check, I asked where was my gushing thanks, to which she responded, “Oh, thank you, too.”)

In any event, in Australia Nitschke cultists are hording suicide drugs.  From the Sunday Herald Sun story:

MORE than 100 Victorians have the deadly drug Nembutal on standby, according to euthanasia advocates, as new figures reveal almost 50 attempts to smuggle doses into the country in the past two years. Exit International founder Dr Philip Nitschke said Victorians had increasingly opted to buy the lethal veterinary barbiturate over the internet from Mexico or Asia over the past three years, rather than travelling overseas to bring it back. “Along the border cities like Tijuana there is a lot of violence with the drug wars and people found it increasingly worrying to go to these areas,” he said.  “So when the mail-order product came along, sure they paid more for it, but the product has always been good. “In Victoria there would be over 100 people, that I’m aware of, who have successfully brought the drug in and stored it away in preparation.”

He acts like it has nothing to do with him.  But he was the one recommending trips to Mexico to get the drugs.  This is his M.O.  Push the agenda but leave himself just a step enough away to not be held legally accountable, as in the Nancy Crick assisted suicide.

Early in my career fighting the death agenda, a woman came up to me after a speech who said she was a member of the Hemlock Society.  She was very sweet and nice, and asked, “How do you envision your death, Mr. Smith?” I blinked, and said, “I’m sorry ma’am.  I’m still working on envisioning my life.”  I find it all very sad.