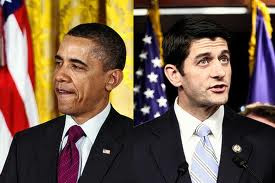 Medicare is going under.  The status quo is not an option.   Rep. Paul Ryan has proposed a major Medicare reform to have future beneficiaries (beginning for those that become eligible in 2022) to receive federal vouchers to purchase private plans.  (This sounds sort of like Plan D Medicare, the drug benefit, that has been a huge success).

I don’t want to argue that point today.  What I really want to focus on is Ryan’s idea—finally formally proposed by a major political leader—to means test Medicare based on the ability to pay.  With the system going broke, it would seem a plan that such a reform is one that all Americans could get around.  Republicans are on board.  But not, apparently some major Democrats.

First, Speaker of the House John Boehner supports means testing. From the story:

Specifically, Boehner endorsed the idea that Medicare — whether private or public — should be means tested. In a Q&A session with one of the event’s moderators — Wall Street billionare-turned-deficit-scold Pete Peterson — Boehner said wealthy beneficiaries should pay for their Medicare premiums. “Pete, I love you to death, but I don’t think the taxpayers ought to be paying your Medicare premium,” Boehner said. “And under Paul Ryan’s plan, what it says is, let’s allow the American people to decide which health care plan fits their needs. And if you’re middle-income, lower income, we are going to pay, just like we do today, for the cost of those premiums. But for people of means, there’s no reason why we should subsidize Pete Peterson’s premium. I’m sorry. He ought to pay the full cost of his premium to be in Medicare.”

In contrast, Rep. Henry Waxman opposes.  From the story:

Underscoring the fact that there’s significant opposition to means-testing Medicare in the Democratic Party, Rep. Henry Waxman’s office blasted out a statement this afternoon pushing back on House Speaker John Boehner’s strong hint that this should be part of the debt limit negotiations. “Under existing law, well-off seniors are already going to be paying more for their Medicare premiums,” says Waxman, a California Democrat. Further changes to Medicare at the expense of the wealthier or middle class seniors may push them to leave the program and end up with Medicare costing more because it would still have the sickest and poorest people left. In other words, this idea may undermine Medicare and cost beneficiaries more at the same time.

Are you kidding me?  I thought the Democrats cared for the common man and the Republicans only take care of “the rich.”

What does POTUS have to say?
0
Print
Email
Prev Article
Next Article