Good.  People are seeing the the sickening anti Semitism exhibited by the author of the San Francisco anti circumcision referendum, as evidenced by the character Mohel Monster (and others) in the comic book “Foreskin Man.”  (I can hardly write that without thinking I am in an alternate universe).  From the ADL Statement:

”This is an advocacy campaign taken to a new low.  This is a sensitive, serious issue where good people can disagree and which the Jewish community feels is an assault on its values and traditions going back thousands of years and centered in the Hebrew Bible.  It is one thing to debate it, is another thing to degrade it.  ’Foreskin Man,’ with its grotesque anti-Semitic imagery and themes, reaches a new low and is disrespectful and deeply offensive. 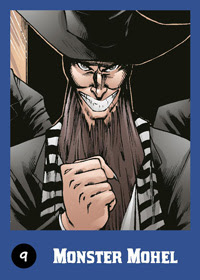 “The comic book portrays mohels — those specially trained to perform the traditional Jewish circumcision ceremony — as rapacious, bloodthirsty and bent on harming children. Some of the imagery calls to mind age-old anti-Semitic canards such as the blood libel, the accusation that Jews ritually murder Christian children. Another comic in the series also calls up more subtle anti-Jewish themes, such as when a character complains that the ‘pro-circumcision lobby’ has ‘all of the well-connected doctors and lawyers.’

“We would have hoped those backing the anti-circumcision effort in San Francisco would know better than to use this type anti-Semitic imagery to advance their cause. No matter what one’s personal opinions of male circumcision, it is irresponsible to use stereotypical caricatures of religious Jews to promote the anti-circumcision agenda.”