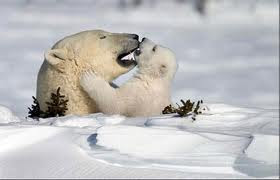 In an age in which emotional narratives often trump facts, the polar bear became the icon of global warming hysteria. After a report about four drowned polar bears seen far out at sea,  they were put on the USA threatened list—even though there has been no demonstrated diminution in population.  Al Gore put the polar bears in his propaganda movie, and even though he, infamously, could only sputter in response to a question by journalist Phelim McAleer that involved the polar bear issue—children are still being warned to cut their carbon or the polar bears will drown.

But now, the original study that warned is apparently under a cloud.  From the AP:

A federal wildlife biologist whose observation in 2004 of presumably drowned polar bears in the Arctic helped to galvanize the global warming movement has been placed on administrative leave and is being investigated for scientific misconduct, possibly over the veracity of that article. Charles Monnett, an Anchorage-based scientist with the U.S. Bureau of Ocean Energy Management, Regulation and Enforcement, or BOEMRE, was told July 18 that he was being put on leave, pending results of an investigation into “integrity issues.” But he has not yet been informed by the inspector general’s office of specific charges or questions related to the scientific integrity of his work, said Jeff Ruch, executive director of Public Employees for Environmental Responsibility.

If true, is it any wonder that the credibility of the entire global warming sector is eroding like a sand castle in a rising tide?  However, Monnett says he’s being persecuted by the Obama Adm.  What?  Why might that be?

On Thursday, Ruch’s watchdog group plans to file a complaint with the agency on Monnett’s behalf, asserting that Obama administration officials have “actively persecuted” him in violation of policy intended to protect scientists from political interference...In May 2008, the U.S. classified the polar bear as a threatened species, the first with its survival at risk due to global warming. According to a transcript, investigator Eric May asked Gleason his thoughts on Gore referencing the dead polar bears. Gleason said none of the polar bear papers he has written or co-authored has said “anything really” about global warming. “It’s something along the lines of the changing environment in the Arctic,” he said. Gleason said others put their own spin on research or observations.

This bears (pardon the pun) watching.  If the original report was wrong, it will really hit GWH hard.  If, however, Monnett is being attacked by the Obama Adm. because he refused to attribute the bear drownings to warming, it will really hit GWH hard.  Of course, the AP could be wrong, and the bears may be irrelevant to the controversy.  I’ll keep an eye out for further developments. Stay tuned.
0
Print
Email
Prev Article
Next Article