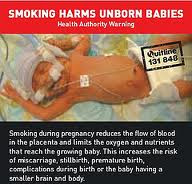 Some abortion opponents use graphic and bloody photos of aborted fetuses as a method for turning people off to abortion rights.  I have never approved of such tactics.  While a few may be persuaded, it seems to me most perceive it as a form of assault that is much more likely to turn people off to pro lifers than it is to be the catalyst for an epiphany.

Now smoking opponents in government have decided to take the same tack to convince people from not smoking.  But an article on the Discover blog predicts that it won’t dissuade people from smoking, with one study even showing that they cause people to inhale more deeply! From “Those Graphic New Cigarette Labels Won’t Help, Psychology Say:

These graphic images, however, may not be an effective way to get smokers to quit, or deter new smokers from starting. Several neuroscience and psychology studies show that these fear tactics have little effect—and may at times do more harm than good.

Interestingly, from my observation, the one area where grizzly photos and depictions may actually be effective is in animal rights/welfare activism.  See a downtrodden or sickly human and we may or may not care.  See an aborted fetus and we will turn our heads.  See a cancerous lung on a cigarette pack and it probably won’t affect our decision to smoke or induce us to quit. But see an ill or abused animal, and for many, emotions go to a wallet-opening peak.

I am not arguing that they shouldn’t, but I am interested in why such emotional advocacy—and again, this is just my observation—seems to be more effective with regard to animals than humans.
0
Print
Email
Prev Article
Next Article