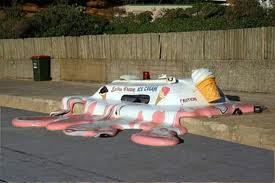 The UK’s National Health Service continues its collapse.  Now, things have gotten so tight that surgeries are being rationed. From the story:

Hip replacements, cataract surgery and tonsil removal are among operations now being rationed in a bid to save the NHS money. Two-thirds of health trusts in England are rationing treatments for “non-urgent” conditions as part of the drive to reduce costs in the NHS by £20bn over the next four years. One in three primary-care trusts (PCTs) has expanded the list of procedures it will restrict funding to in the past 12 months. Examples of the rationing now being used include:

* Hip and knee replacements only being allowed where patients are in severe pain. Overweight patients will be made to lose weight before being considered for an operation.

* Cataract operations being withheld from patients until their sight problems “substantially” affect their ability to work.

* Patients with varicose veins only being operated on if they are suffering “chronic continuous pain”, ulceration or bleeding.

* Tonsillectomy (removing tonsils) only to be carried out in children if they have had seven bouts of tonsillitis in the previous year.

* Grommets to improve hearing in children only being inserted in “exceptional circumstances” and after monitoring for six months.

* Funding has also been cut in some areas for IVF treatment on the NHS.

The alarming figures emerged from a survey of 111 PCTs by the health-service magazine GP, using the Freedom of Information Act.

And it is only going to get worse, considering the trajectory.  Imagine the screaming here if HMOs did any of that. (I don’t believe IVF should be paid for by public money or covered by insurance.  But let’s not deal with that here.)

The continuing collapse of the NHS is not only an indictment of single payer health care: It is a warning to the U.S. about centralized control of health care.  The Obama Adm. is in the process of dictating to the entire private health insurance industry what they must cover in every health insurance policy.  And, they are not letting companies underwrite for premiums.  Obamacare is already beginning to break the budget bank. Not only that, but it is undermining coverage through employment, which would be even worse but for the ubiquitous waivers.

Adding injury to injury, how easy it is for the bureaucrats to lard on the goodies on the private insurance companies’ dimes—as is already happening.  What makes us think that a too strained and bureaucratically suffocated private sector won’t eventually end up in a collapse—further harming the economy—and unable to provide for patients properly?

Once that happens (with malice aforethought?) Obamacarian class warriors will give a war whoop of triumph for having destroyed the dreaded private sector—and force us into single payer.  See, “NHS Meltdown” posts.  Lose. Lose. Lose.
0
Print
Email
Prev Article
Next Article