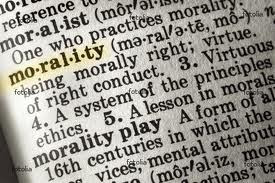 Bioethicist Daniel Callahan has an interesting bit out at the Hastings Center blog.  He says the term “immoral” is way overused in bioethical debates. As an example, he notes that he opposes proposed cuts in the “safety net,” but says that those who disagree with him are not “immoral.” From “The Political Use of Moral Language:”

A dictionary definition of immoral is “not following accepted standards of morality” (Oxford) or “not conforming to a high moral standard” (Merriam-Webster). The obvious problem in this case is that those most prone to slice away at the social safety net are in a party whose views on what we owe our neighbor represent an enduring part of American history and culture, going back to Thomas Jefferson and noted later by de Tocqueville, that of extreme individualism, market freedom, and hostility to government.

Without getting into whether he has properly framed that particular question (I don’t think he has), the point for this SHS post is that Callahan isn’t ready to label those who oppose the welfare state as “immoral,” because individualism is central to our nation’s history, and indeed, such thinking go all the way back to the American founding.

But shouldn’t that numbers game be irrelevant in determining whether a particular policy agenda is immoral?  After all, during my lifetime, racist laws were once accepted as proper by the overwhelming majority of people in the USA.  No more, thank goodness. But surely it was just as “immoral” to create invidious distinctions based on race when it was the majority view as it would be now, when outright racism has been driven to the fringe.

The trouble with the word immoral is that its connotation is not just that a moral rule has been broken but that it reflects the ideas or actions of a corrupt person, someone of bad character. I thus put the word “immoral” in the same category as the term “un-American,” a Tea Party favorite, suggesting a violation of American values and, even worse, someone who does not love our country. And as we well know, Friedrich von Hayek tutored many in their hostility to government to believe that “socialist” government programs take us straight down the road to serfdom.

Ad hominem arguments combined with slippery slope predictions have become the accepted rhetorical style of conservative opponents of communitarian, social justice convictions. Nothing is added, and much that is harmful, is introduced into the public debate by the word immoral. My own observation is that neither liberals (aka progressives) nor conservatives have a monopoly on morality. That our communitarian crowd favors a strong social safety net is a tribute to our wise (even if politically controversial) judgment about the common good, not a sign of superior morality.

But that still misses the nail by a mile.  I agree that we shouldn’t turn these debates into as hominem name calling contests. But I disagree that we should take the I-word off the table.  If we perceive a particular bioethics policy or proposal to truly be “immoral,”  we should say so.  However, that epithet should not be wielded simply because we disagree.  Rather, to avoid word/term inflation, it should be reserved solely for those situations in which we believe the (proposed) policy or action has (or will) lead to a truly immoral result or outcome.

Which, of course, begs the very question that Callahan avoided: What constitutes “immoral” in the context of bioethical discourse and debate?  If we can’t peg that down, how can we ever distinguish between what is truly “right” and “wrong?”  Or is that concept too 19th Century for our postmodern sensibilities?

I think not. I believe we can define what is moral and immoral in bioethics. In fact, I think it is essential that we do so, otherwise the field merely becomes one of situational ethics with gut feelings or popular and transitory emotional sensibilities serving as the basis for decision making.

Which begs yet another question: What do I think a definition of “immoral” should be in the bioethical context? That which undermines human exceptionalism and the equal moral worth of all people by treating any human being as an object instead of subject, is properly termed “immoral.”

This doesn’t mean those who support such policies are personally immoral (or evil)—nor that I am morally superior to those who disagree with me about those issues.  But it does mean, I think, that if I believe a given policy would lead to immoral results (as defined above), I have a personal duty to lawfully and peacefully oppose them (and conversely, to lawfully and peacefully  support those policies or ideas that reinforce  and uphold what I perceive to be moral).  And, I think, I am entitled to make prudential and judicious use the I-word, not as a personal attack on those who disagree (“You are immoral!”) but as a characterization of outcomes (“That would be immoral.  Here’s why.”) And that is true even if I am the only person in the world holding that ethical view.
0
Print
Email
Prev Article
Next Article