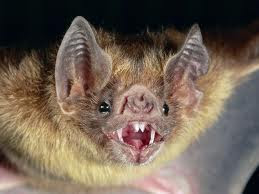 Stories about the benefits of animal research are so ubiquitous that it is easy to forget that a cadre of animal rights activists want to end all such experimentation.  Here’s one that is a little different from the usual.  Vampire bats may hold the key to future pain control.  From the San Francisco Chronicle story:

After that work Julius and his lab colleagues sought to look for similar nervous system molecules in vampire bats, as he recalled in a conversation Tuesday. “But we didn’t know where to find them,” he said - until Julio F. Cordero-Morales, another post-doc in his lab, said he knew a research team in Venezuela whose members were studying the bats. Promptly the Caracas group collected samples of nerve cell masses from the noses of wild vampire bats, shipped them to San Francisco in dry ice, and the Julius team went to work. They fixed some samples with formaldehyde and homogenized others to sequence their genes.

The nerve cells they studied are similar to the molecules in human nerve fibers that give people acute sensitivity to the sensation of heat like that which comes from eating chili peppers and spicy foods containing the heat-emitting chemicals called capsaicins. Analyzing the genes involved in heat sensitivity among animals like snakes and vampire bats is also leading Julius and his colleagues to study the possibility of new approaches to pain relief in humans, he said. The nerves the researchers are studying in bats and snakes are akin to nerves in humans that cause such pain in nerve disorders like trigeminal neuralgia, a chronic pain condition that affects the trigeminal nerve, which carries sensation from face to brain.

Who are those researchers to kidnap those bats and remove tissue without informed consent?  They are sentient beings.  They have rights!