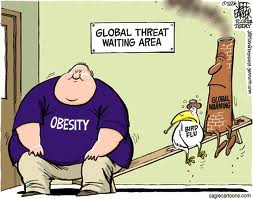 So, about two weeks ago, I came across an article in The Lancet that advocated an international campaign to fight obesity (Changing the Future of Obesity: Science, Policy and Action, August 2011). Since I believe that promoting “wellness” will become a pretext for big government exerting ever increasing control over our lives, I decided to give it a tumble.  As I read the article, it hit me hard.  You could replace the words “global warming” for “obesity” in much the piece, and barely tell the difference.

So, I e-mailed my friends at the Weekly Standard pitching a column about how obesity is going to be the next global warming.  They liked the idea and it was published in the current issue.

The paper calls for treaties, UN action, and World Health Organization mobilization.  But of course, we will also need national laws,  meaning more bureaucracy, meddling, and intrusiveness.  This also means wealth redistribution. From “The New Global Warming: Here’s An Issue Governments Can Get Fat On:”

Wealth redistribution is another familiar component of fighting the bulge. Since the poor among us tend to be fatter, government leaders are called upon to “ensure [that] taxation and social policies support reduction of socioeconomic inequalities that contribute to health inequalities.” Also, “increased investment in population obesity monitoring” will be required. In other words, tax the rich to make us thin.

And we must be anti-car!

And what modern international crusade would be complete without targeting the automobile? “Healthy public policies” should “prioritize public transport, walking, and cycling environments, and safe recreation spaces in transport and urban planning policies and budget allocations.” Shades of Al Gore.

There are also corporate villains to punish with higher taxes and restricted influence over policy.  And yes, a new opportunity for government funded scientists to push favored policies.  Yes, there will be computer models!

Lest anyone think I have stretched the connection, the authors make it themselves:

“Obesity,” they write, “should be considered alongside other major issues that confront societies .??.??. [including] reduction of poverty in all countries, a sustainable food supply, and action against climate change, because they all have strong links with obesity prevention, including common causes and solutions.”

With the coming anti-obesity campaign so similar to the global-warming juggernaut, it seems clear that modern liberalism has devised a new strategy for imposing policies that it can’t attain through ordinary politicking. First, identify a crisis ostensibly caused by modern lifestyles and/or capitalism. Next, launch a multifaceted international response to prevent allegedly looming catastrophe. Third, act as if the desired policies are objective, scientific solutions. Fund it all by imposing onerous taxes on an expanding list of villainous enterprises, et voilà: Liberalism rides to the rescue. And if the strategy fails on one front, as it appears to have with global warming, find another crisis and start again.

Now, I realize that we have a problem with obesity in society.  As in global warming hysteria, the issue for me is how a real or purported problem has been seized upon to further already existing political agendas. I conclude:

Let me be clear: No one denies that obesity is a serious problem. Anyone who is overweight should eat less, eat better, and exercise more. We can argue about government’s proper role in promoting good nutrition. But there is a genuine crisis to consider as well—the obesity of government. We should not allow the need to encourage good health to be an excuse for empowering yet another economically enervating, bossy, bureaucratic behemoth dedicated to promoting political agendas more than to helping people control their weight.

Not that I don’t want to do my part.  Every mass political campaign needs a hyper celebrity to act as the front.  The newly declared vegan, Bill Clinton, would be perfect.  He could even star in his own propaganda movie, An Inconvenient Adipose.  Oscar and Nobel Peace Prize, here we come!
0
Print
Email
Prev Article
Next Article