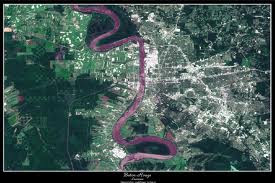 In.san.i.ty—as in “extreme folly or unreasonableness”!  The EPA admitted in a legal brief that its proposed rules to regulate greenhouse gasses beginning in 2016, would require 230,000 new employees to administer, but it wants to forge ahead anyway.  From the EPA’s legal brief, quoted at the Institute for Energy Reasearch Website:

Sources needing operating permits would jump from 14,700 to 6.1 million as a result of application of Title V to greenhouse gases, a 400-fold increase.…Hiring the 230,000 full-time employees necessary to produce the 1.4 billion work hours required to address the actual increase in permitting functions would result in an increase in Title V administration costs of $21 billion per year.

Are they out of their minds?  That’s as many people as live in Baton Rouge, the satellite view of which is embedded above. Can it get anymore ridiculous, bloated, or hysterical than that?  This madness must be stopped.

Update: Just to be clear: The above headline is an example of hyperbole.  Under current law, if CO2 is going to be regulated under the Clean Air Act, the EPA would have to hire 230,000 bureaucrats to fulfill their legal charge.  The agency knows that is impossible—for now.  But that mandate is self generated, that is, the EPA decided to regulate CO2 and other greenhouse gasses once the Supreme Court said it could legally do so. Thus, the agency created its own problem.  If it were to go back to its original clean air mandate—which never contemplated regulating simple carbon dioxide—then, those needed bodies working in buildings full of cubicles would not need to be hired under the law.  But the EPA refuses to back off its regulatory hegemony over the economy, hence, it wants 230,000 new employees.  Eventually.
0
Print
Email
Prev Article
Next Article