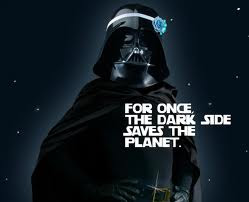 Environmentalism ain’t what it used to be.  Rather than being beneficently about maintaining a clean environment and promoting conservation, the radical edge has been pushing increasingly toward the dark side—turning anti human exceptionalism and anti progress. And alas, these days the fringe increasingly is becoming the center.

Here’s a good example of what tomorrow’s environmentalism may look like.  In a Q & A interview in the Ecologist, Paul Kingsnorth explains why he co-created the radical environmentalist Dark Mountain Project.  And it ain’t pretty. First, the introduction of Kingsnorth and his influence within contemporary environmentalism.  From the interview:

Whether you call it doom-mongering or good old-fashioned common sense, there’s no doubt that Dark Mountain – the environmental movement founded by former Ecologist deputy editor Paul Kingsnorth and social activist Dougald Hine – has proven to be one of the most influential strands of green thought to emerge within the last five years.

And what, pray tell, does the Dark Mountain Project hope to accomplish?

We exist to challenge the stories of civilisation, to question progress and human exceptionalism and the direction of our machine culture. We aim to create new stories more appropriate for an age of decline and contraction and rediscovery.

Regression as an accepted reality?  Isn’t that called giving up?

Dark Mountain is not about ‘giving up’ or wallowing in doom or anything like that. Some people think it is, but they’re the ones who haven’t been paying attention. Dark Mountain is a process. First you give up on the unrealistic ambitions of both the mainstream growth narrative and the mainstream green narrative – creating a “sustainable” consumer democracy for nine billion people, stopping climate change, making capitalism nice and all the rest of the utopian stuff. You give up on that and then you can move on. You embrace what we might call radical honesty, and you look at what is possible and what’s not, and you see your true place in the world and in history...We call this the “hope beyond hope.” First you get real. Then you give up. Then you are re-inspired.’

Maybe it’s my age, but that’s just gobbledygook to me.  I have no idea what it means.

So, I went to the Dark Mountain Website to see if I could find a better explanation. There, I found the “Eight Principles of Uncivilization,” among which are:

3. We believe that the roots of these crises lie in the stories we have been telling ourselves. We intend to challenge the stories which underpin our civilisation: the myth of progress, the myth of human centrality, and the myth of our separation from ‘nature’. These myths are more dangerous for the fact that we have forgotten they are myths.

4. We will reassert the role of story-telling as more than mere entertainment. It is through stories that we weave reality.

5. Humans are not the point and purpose of the planet. Our art will begin with the attempt to step outside the human bubble. By careful attention, we will reengage with the non-human world.

Ah, the old nonsense that we are merely another animal in the forest.  But that’s the real myth, and a destructive one at that. If enough people reject the very notion of progress, indeed, if we embrace “uncivilization,” the very collapse Kingsnorth claims is inevitable will come about as a self-fulfilling prophesy.

So, here’s the real story we should tell: Decline is a choice.  Embracing regression would lead to the deaths of millions from the effects of poverty and disease.  And the rejection of human exceptionalism would cause the destruction of the precious freedom “civilization” has fought so hard and for so long to attain.
0
Print
Email
Prev Article
Next Article