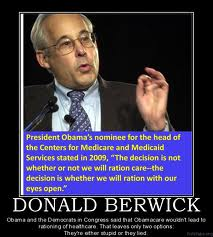 Donald Berwick has resigned as the head of Medicare.  From the Boston Globe story:

Don Berwick, the Harvard professor who was tapped by the Obama administration to lead the overhaul of the massive Medicare and Medicaid programs, resigned today — just months before he was scheduled to leave his post. Despite his reputation as a health care innovator, Berwick became enmeshed in the divisive politics over revamping the country’s health care system. At least 42 Republican senators had vowed to block his confirmation, prompting Obama in July 2010 to use a recess appointment last year to install him in office.By law, Berwick’s temporary appointment as the top administrator of the Centers for Medicare and Medicaid Services would have expired at the end of the year.

That would have been pretty tough, since in the summer of 2010, there were only 41 Republican Senators.

But never mind.  Let’s look at the real reason Obama chose this course.  It wasn’t the opposition of 41 Republicans.  I don’t recall every senator with an R after his or her name vowing to block Berwick. But even if they had, Obama gave up trying to have Berwick confirmed without a fight.  Indeed, he wasn’t even given the courtesy of a confirmation hearing by Democrats.

Why? Obama and the Democrats didn’t want Berwick answering questions at a Senate confirmation hearing because he has supported health care rationing in general, and NICE and the NHS’s rationing system in specific. That would have proved very embarrassing at a time when the the country was opposed to the then newly passed Obamacare, the 2010 elections were approaching, and some voters worried that the law could lead to “death panels.”  So, rather than permit democratic processes to play out, the president acted cynically to avoid transparency.

Now the price has to be paid and Berwick is out.  Hopefully, after next year’s election, Obamacare will be too.  It will be interesting to see what Berwich says about rationing and Obamacare now that he is freer to express his own opinions.
0
Print
Email
Prev Article
Next Article