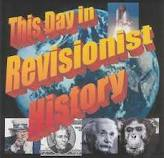 Media creates myths that revise history.  Example: ”Terri’s Law,” by which Congress sought to save Terri Schiavo’s life is now called a “Republican” intrusion into a private situation.  But guess how many Democrats in the U.S. Senate opposed the legislation?  Zero.  That’s right, not one.  Senators Hillary Clinton, Harry Reid, Barach Obama, and the entire D crowd gave unanimous consent.  Not only that, but the Democratic House caucus split about 50/50.  Indeed, Terri’s Law was one of the most bipartisan legislative endeavors passed during the Bush years.  Somehow, the media always forgets to report that fact.

And now, we are being told that the would-have-been health care rationer, Donald Berwick, is out at Medicare solely because of Republical intransigence.  From a Joe Nocera column in the NYT lamenting the professional passing of Dr. Berwick from government service:

But there’s one more thing about Berwick: He believes that President Obama’s health care reform is “an important moral step toward universal health care.” As he put it when we spoke: “Because of it, our country is, at last, making health care a basic human right. It is a majestic thing.” Naturally, this view made him anathema to Republicans, who blocked his nomination in the usual way. They pored through his old speeches and articles, plucked out a few comments they objected to — he once praised the British health care system! — and announced that they would never confirm him.

President Obama was not deterred the way he had been when Republicans objected to Elizabeth Warren becoming the chief of the new Consumer Financial Protection Bureau. Instead, in July 2010, Obama named Berwick to the post in a recess appointment that did not require Senate confirmation. But, like all recess appointments, it was temporary. Berwick left the post just weeks before his appointment was set to expire.

To the contrary, President Obama was completey deterred because he didn’t want to risk Berwick testifying at a confirmation hearing where Berwick would have been forced to discuss his health care rationing views.  That could have upset a public worried about “death panels,” costing Dems votes in the pending 2010 elections, given that Obamacare was a huge issue in the campaign.  Republicans gained ground anyway, so it seems to me that cravenly jettisoning Berwick was a terrible political mistake for the president—if he really thought it was important that Berwick serve.

It is true, of course, that most Republicans opposed Berwick.  But remember in 2010, the GOP only held 41 seats in the Senate.  That meant Berwick’s nomination was eminently winnable, if only 1 R was picked off.  But the Democrats never even tried—because some of them also were not on the Berwick train.  They never even gave Berwick the courtesy of a confirmation hearing to sell himself, and President Obama short circuited the process by issuing his recess appointment—now expired—sealing his fate as a short termer from the day he walked into the building.
0
Print
Email
Prev Article
Next Article