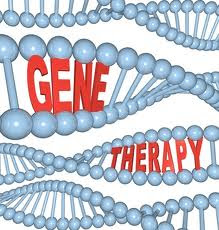 The rough idea behind gene therapy is to introduce a properly working replacement gene into the body via a virus.  If it works, the malfunctioning expression is repaired and the genetic disease either successfully treated, or even cured.  A new gene therapy has succeeded in early human trials.

The theory is great.  The actual application hasn’t been  But now, scientists succeeded in treating six patients with a form of hemophilia.  From the NYT story:

Medical researchers in Britain have successfully treated six patients suffering from the blood-clotting disease known as hemophilia B by injecting them with the correct form of a defective gene, a landmark achievement in the troubled field of gene therapy. Hemophilia B, which was carried by Queen Victoria and affected most of the royal houses of Europe, is the first well-known disease to appear treatable by gene therapy, a technique with a 20-year record of almost unbroken failure...Gene therapy has had minor successes in very rare diseases but suffered a major setback in 1999 with the death of a patient in a clinical trial at the University of Pennsylvania.

That was the Jessie Gelsinger case.  Gelsinger was treated in a non therapeutic safety study despite earlier monkey studies showing that it wasn’t safe—as in the monkeys died—about which deaths Gelsinger was not informed (among other problems with the study). A major purpose of animal studies is to test safety before trying it in humans.  Thus, the dead monkeys should have prevented a dead human. The failure to follow proper protocols both cost Geller his life and set back the sector significantly.

Animal studies also showed how to best monitor the future health of these subjects:

“I think it’s incredibly exciting, and I say that even though these people are my competitors,” she said. Dr. High is listed as a co-author of the report because her laboratory helped monitor the patients and provided proof for regulators that the virus would not insert its human gene into the patients’ sperm and make the change hereditary.

A serious problem with other delivery viruses is that they insert themselves randomly into chromosomes, sometimes disrupting a gene. The virus used by Dr. Nathwani’s team, known as adeno-associated virus-8, generally stays outside the chromosomes, so it should not present this problem. Still, patients will need to be monitored for liver cancer, a small possibility that has been observed in mice.  “I don’t think it’s a showstopper, but it’s a critical safety issue that has to be assessed,” Dr. High said.

And so we see another benefit from animal research.  Because the mice were studied, a potential health problem was identified, allowing these patients to be monitored for that specific problem in the future.

Animal rights activists are flat out wrong factually when they claim that animal studies do not benefit human beings in medical research.  It’s either a lie or arises out of appalling ignorance.

They can still claim it is unethical  to use animals, of course.  That would be an honest debate. But they will have to persuade people that the lives of monkeys or mice should not be sacrificed to save those of humans, or we could just stop advancing the state of scientific and medical progress.

Meanwhile, thanks in part to animal research, this form of gene t herapy has high hopes for alleviating much human suffering.
0
Print
Email
Prev Article
Next Article