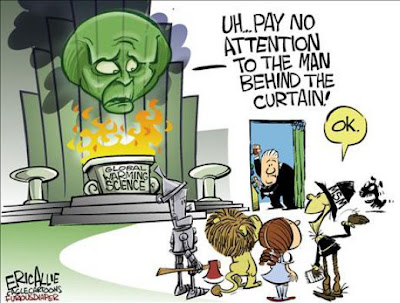 Sixteen notable scientists have signed a powerful op/ed in today’s Wall Street Journal illustrating how and why climate research devolved into an unwarranted global warming hysteria.  First, they point out that the most recent data rebuts the hysteria meme. From “No Need to Panic About Global Warming:”

Perhaps the most inconvenient fact is the lack of global warming for well over 10 years now...The lack of warming for more than a decade—indeed, the smaller-than-predicted warming over the 22 years since the U.N.’s Intergovernmental Panel on Climate Change (IPCC) began issuing projections—suggests that computer models have greatly exaggerated how much warming additional CO2 can cause. Faced with this embarrassment, those promoting alarm have shifted their drumbeat from warming to weather extremes, to enable anything unusual that happens in our chaotic climate to be ascribed to CO2.

The scientists also note how science itself has been corrupted by the politicization of the hysterics:

Although the number of publicly dissenting scientists is growing, many young scientists furtively say that while they also have serious doubts about the global-warming message, they are afraid to speak up for fear of not being promoted—or worse. They have good reason to worry. In 2003, Dr. Chris de Freitas, the editor of the journal Climate Research, dared to publish a peer-reviewed article with the politically incorrect (but factually correct) conclusion that the recent warming is not unusual in the context of climate changes over the past thousand years. The international warming establishment quickly mounted a determined campaign to have Dr. de Freitas removed from his editorial job and fired from his university position. Fortunately, Dr. de Freitas was able to keep his university job. This is not the way science is supposed to work...

Unfortunately, after making that very cogent obervation, the scientists go way over the top—really jump the shark—by comparing GWH to the suppression and killing of scientists in the Soviet Union in the wake of the Lysenko fraud.  Please. But their point that suppression of heterodox views corrupts the scientific method remains valid.

The scientists then show the vested interests involved in the academic/government complex pushing GWH:

Alarmism over climate is of great benefit to many, providing government funding for academic research and a reason for government bureaucracies to grow. Alarmism also offers an excuse for governments to raise taxes, taxpayer-funded subsidies for businesses that understand how to work the political system, and a lure for big donations to charitable foundations promising to save the planet.

The conclude by saying such draconian action to “decarbonize” the atmosphere is unwarranted, and indeed suggest that minor warming could benefit many areas of the world.

I don’t know about the latter point.  I think there will be pluses and minuses whatever happens to the climate, whether changes are naturally or anthropocentrically caused. But I do agree with these scientists’ assertion that hysteria is not warranted and with their diagnosis that the Global Warming Science Establishment ran the sector into a credibility ditch.
0
Print
Email
Prev Article
Next Article