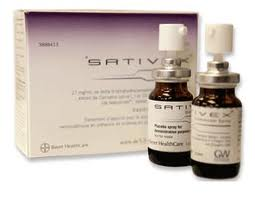 I am going to keep pounding this drum. The Federal Drug Administration is going to be asked to approve a prescription drug derived from real marijuana.  But there is a problem.  From the AP story:

A British company, GW Pharma, is in advanced clinical trials for the world’s first pharmaceutical developed from raw marijuana instead of synthetic equivalents_ a mouth spray it hopes to market in the U.S. as a treatment for cancer pain. And it hopes to see FDA approval by the end of 2013. Sativex contains marijuana’s two best known components—delta 9-THC and cannabidiol—and already has been approved in Canada, New Zealand and eight European countries for a different usage, relieving muscle spasms associated with multiple sclerosis.

FDA approval would represent an important milestone in the nation’s often uneasy relationship with marijuana, which 16 states and the District of Columbia already allow residents to use legally with doctors’ recommendations. The U.S. Drug Enforcement Administration categorizes pot as a dangerous drug with no medical value, but the availability of a chemically similar prescription drug could increase pressure on the federal government to revisit its position and encourage other drug companies to follow in GW Pharma’s footsteps

It’s more than just the DEA.  The Controlled Substances Act states marijuana has no medicinal value.  It’s the law. And therein lies the problem: The FDA, as a regulatory agency, cannot override a statute, only apply it.

But this is a great opportunity for Congress to make fact-based revisions to the CSA by placing it into a category—like the much stronger cocaine and morphine—that has medicinal uses.  That would free the FDA to approve these drugs if they demonstrate proper efficacy.

But that won’t happen without leadership. Hello, President Obama! Calling Governor Romney!  Hey, Speaker Gingrich!  Yo, Senator Santorum.  Paging Dr. Ron Paul!  Make marijuana reclassification a campaign issue.  That could spur the cowardly Congress into revising the law, which is now clearly not fact based.

And you recreational users: Stand aside. The argument over full legalization can wait until later. If you confuse the two issues, you won’t get the legalized highs you want and sick people won’t get their medicine.
0
Print
Email
Prev Article
Next Article