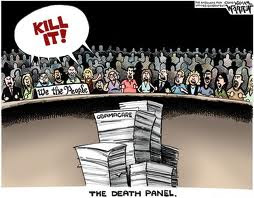 So much for people liking Obamacare the more they learn about what is in it. Majorities still oppose the law and 2/3 want it tossed by the Supreme Court.  From the ABC story:

Two-thirds of Americans say the U.S. Supreme Court should throw out either the individual mandate  in the federal health care law or the law in its entirety,  signaling the depth of public disagreement with that  element of  the Affordable Care Act. This ABC News/Washington Post poll finds that Americans oppose the law overall by 52-41 percent. And 67 percent believe  the high court should either ditch the  law or at least the portion that requires nearly all Americans to have coverage.

That and $2.00 will buy you a small cup of Starbuck’s coffee.  Popular or unpopular is (or should be) irrelevant to constitutionality.

Back in the real world, the technocratic class likes the law.  It empowers them. The Supreme Court jurists are mostly of that class.  The courts tend to serve their interests and reflect their views.  That is why I have predicted Obamacare will be declared constitutional.

My hope is that the recent anti-Catholicism of Obama has shown the five conservative Supremes—the four liberals always vote in lockstep with the leftwing agenda—that the law is more then a step too far.  Doubtful, but we’ll see.  The Court hears the case a week from today.  It’s breath holding time.
0
Print
Email
Prev Article
Next Article