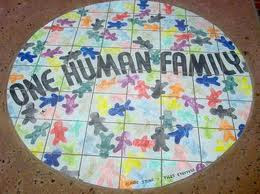 John Derbyshire has written a racist article at Taki’s Magazine, in which he envisions “the talk” about race relations with his children. Pertinent to the business of this blog, racism is a form of anti HE.

Derbyshire traces what he claims to be the percentages of “West African”, “white” and “aboriginal admixture” in most African-Americans—good grief, who cares?—claims our black brothers and sisters are generally “less intelligent”—even if African-Americans have lower IQ test scores it has nothing whatsover to do with biology, intrinsic human merit, or innate equality, and again, who cares?—are generally dangerous, should mostly be given “cognitively non challenging” jobs, and urges his children to avoid being anywhere near ”high concentrations” of black folk.  I won’t get into it all, since you can read the screed for yourselves. Here is part of how he concludes.  From “The Talk: Non-Black Version:”

Thus, in those encounters with strangers that involve cognitive engagement, ceteris paribus [all other things being equal] the black stranger will be less intelligent than the white. In such encounters, therefore—for example, at a government office—you  will, on average, be dealt with more competently by a white than by a black. If that hostility-based magnifying effect (paragraph 8) is also in play, you will  be dealt with more politely, too. “The  DMV lady“ is a statistical truth, not a myth.

(13) In that pool of forty million, there are nonetheless  many intelligent and well-socialized blacks. (I’ll use IWSB as an ad hoc abbreviation.) You should consciously seek opportunities to make friends with IWSBs. In addition to the ordinary pleasures of friendship, you will gain an amulet against potentially career-destroying accusations of prejudice.

Humans beings are one species, e.g., we are all Homo sapiens.  Race is a fiction that has been used to divide us and which has served us profoundly ill since the supposed differences among the “races,” such as skin color or eye appearance, are utterly superficial and morally irrelevant.

Racism has been a cancer on America since our earliest days, and race relations is a very important important topic for us all to consider.  But our continuing differences, which are thankfully lessening, are not healed by creating false and invidious distinctions among equals, as Derbyshire does. Rather, we must all be about the business of promoting mutual love and respect, and in walking the extra mile with each other in the understanding of the continuing hurt and anger that our racist history continues to inflict on our entire nation.

Yes, there are demagogues who still try to impede the racial healing that we have experienced over the course of my lifetime. But there is no excuse whatsoever to join that chorus.

I have had my run-ins with Derbyshire before over his crass anti human exceptionalist views. But this takes the cake.