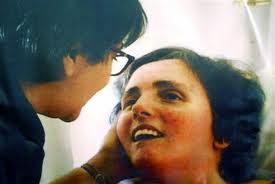 I have a piece out in the Human Life Review decrying the “unrepentant bigotry” that allows people with profound disabilities to be denegrated as “skin bags” (as one example), or if profoundly cognitively disabled, as mere flora.  From “That Unrepentant Bigotry”(citations omitted):

“Stop the hate!” we are often told.  To be sure, that is a worthy goal.  Indeed, in recent decades great strides have been made throughout society in accepting most of us, as indeed, truly and clearly, “us.”  For example, the worst forms of racist speech are now far beyond the pale—to the extent that the despicable N-word can no longer be uttered publicly without serious social consequences—even to popular entertainers—and racist jokes are, thankfully, mostly an ugly anachronism of the unlamented Jim Crow past. Meanwhile, most frown at sexist, homophobic and other epithetic utterances intended to demean whole categories of people based on personal characteristics or creed.  Finally, after decades of effort and consciousness raising, Martin Luther King’s dream of a culture that judges people on the content of their character is encouragingly close to reality.

But the news is not all good. Many of our brothers and sisters remain the victims of a pervasive but nearly invisible bigotry—and indeed subjected continually to profoundly demeaning and hateful characterizations—mostly without social protest, cultural opprobrium, or even notice by the usual enforcers of cultural comity.  Indeed, the “hate speakers” may even be applauded or their denigration either not noticed or ignored, perhaps because the denigrators are often themselves unaware that they have engaged in hurtful rhetoric.

Ironically, this still-discriminated-against group is also our most diverse. Its membership comes in all races, ages, nationalities, genders, sexual orientations, and any other human identifier one can conjure.  In fact, if not already within this scorned cadre, any one of us could become a member at any time, and all of us have—or had—loved ones who could be so identified. So, who are these despised unfortunates?  People with profound cognitive disabilities and catastrophically debilitating diseases, against whom it remains respectable to employ profoundly demeaning descriptives both in public discourse, public policy advocacy, and private conversation.

I go into the history of such bigotry, including eugenics, Permission to Destroy Life Unworthy of Life, and other matters, and give examples in the contemporary scene such as David Brooks using the bag of skin pejorative and Family Guy attacking Terri Schiavo as a “vegetable.”  I also describe the impact of the “unrepentant bigotry,” for example, how the organs of such people are now coveted within some elements of the transplant medical and bioethics communities.  Also, how some are now saying that it would be right to euthanize such people for the benefit of society.

Activists and their supporters who struggle against racism and other forms of discriminatory thinking have long understood that the words we use express how we think, which in turn, leads to action being taken—both private and public.  By working to make racist and similar epithets beyond the pale, activists like Martin Luther King understood that better behavior would follow—and so it has.

Yet, there remains in society one group of people who are still mocked, dehumanized, marginalized, castigated, blamed for woes, and subjected to threatened actions that present a clear danger to their lives and futures. If we are to have a truly equal and moral society, if our health care system is to have any chance of caring properly for the least of those among us, to use a Biblical turn of phrase, we need to watch our mouths and cleanse our hearts.

It’s a long article but it puts a lot of things we have discussed here into a broader mosaic. Check it out.
0
Print
Email
Prev Article
Next Article