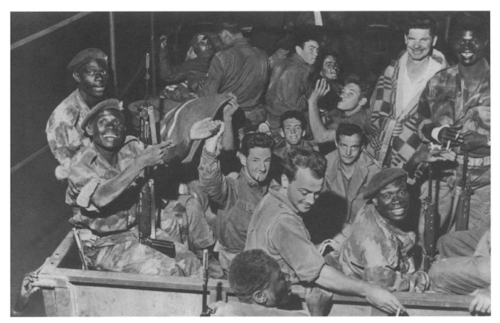 The two worst things that can happen to a mercenary are dying and not getting paid, possibly not in that order. Think of it this way: Plenty of mercenaries have a death-wish; not one has ever had a not-getting-paid-wish. In 1978, “Mad Mike” Hoare was the most famous mercenary in the world, having distinguished himself in the Congo wars of the early 1960s, and he knew from experience that the only thing harder than squeezing money out of a loser who no longer has the means to pay his mercenaries is coaxing it out of a winner who no longer feels like he has to. Hoare had already turned down several jobs when the client proved unwilling to cough up a large down payment, including an offer from the deposed king of Uganda in which Hoare was promised free run of the treasury in Kampala, “as soon as you capture it.”

In other words, it is almost unbelievable that Mike Hoare would agree to stage a coup in the Seychelles without any payment up front, much less agree to finance the preliminary expenses out of his own pocket. But in 1978, against his better judgment, he did. One reason was that Hoare honestly believed in the righteousness of the mission. He was a committed anti-Communist, and the regime that had displaced his client was odious in all the usual ways: ruinous price controls, imprisonment of journalists, suppression of the church, reeducation camps for children. Another reason was that this was a low-risk coup. No major country had much of a stake in the Seychelles, and the countries that cared even a little bit what happened there (France, South Africa, the U.S.) were tentatively in favor of regime change. Hoare therefore had no reason to expect much international outcry whether he won or lost — and he would probably win, since the Seychellois army was made up of imported Tanzanian soldiers who were badly trained, few in number, and not terribly invested in the fate of the country.

But those are ordinary reasons. To do something so naive and unprofessional, Mike Hoare needed an extraordinary reason. The X factor in this case was that Mike Hoare wanted to show up his arch-rival, the French mercenary Bob Denard.

Earlier that year, Denard had deposed a Marxist dictator in the Comoros, a tiny island nation in the same neighborhood as the Seychelles and in many ways a mirror image of it, apart from being 98 percent Sunni Muslim rather than 90 percent Catholic — sunny beaches, subsistence fishing with a smattering of agriculture, the beginnings of a tourism industry. Like Hoare, Denard had made his name in the Congo, and like Hoare, he tended to put a pro-Western, anti-Communist spin on his mercenary activities — the title of his autobiography is Corsaire de la République . He had even achieved a measure of personal fame, mostly from rumors that Frederick Forsyth drew heavily on his exploits in Biafra and Benin for The Dogs of War . 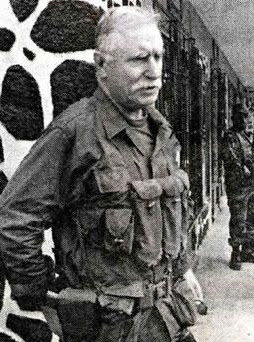 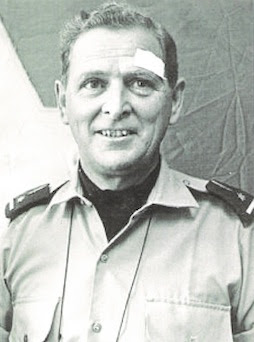 Otherwise, the two men couldn’t have been more different. Denard (left) was a scoundrel who had never been anything but a soldier; in civilian life Hoare was an accountant. Denard had six wives (no problem according to the Comorian grand mufti); Hoare had been faithfully married to the same woman since 1961. Denard was an improvisational commander who, back in the Congo, once charged his men forward on bicycles when a delivery of trucks failed to come through; Hoare was a meticulous planner who had lost at least one potential client by insisting on several months’ delay while he did his research. Denard tended to leave a trail of enemies crying betrayal; Hoare attracted loyalty like a magnet. Denard had no problem recruiting murderers, thugs, and sadists; Hoare was more selective. Needless to say, they hated each other.

The temptation to redeem not only his own reputation but that of all gentlemanly mercenaries by replicating Denard’s coup must have been overwhelming for Mike Hoare — all the more so because the Comoros op had been such a cakewalk. With fewer than a hundred men, Denard had taken the capital, defeated the Comorian army (such as it was), executed the president, and installed a successor. There was no resistance from the population, who by that time were tired of the dictator Ali Soilih, a radical who had studied in Paris at the same time as Pol Pot and whose Marxism was an odd combination of doctrinaire Maoism (complete with a homegrown Red Guard) and an innocent soixante-huitard idealism. On the night of the coup, Denard found him in the presidential palace with two women in his bed and a joint in his hand. This was not the first time they had met: Ali Soilih had some to power three years before in a coup that Denard orchestrated.

As for the Seychelles, its army was also weak; its leader was also unpopular and, for that matter, illegitimate. France-Albert René had come to power through a coup of his own, deposing elected president Jimmy Mancham ( as seen on this blog ) when Mancham was out of the country. Two practically identical island paradises; two practically identical plans to depose a Marxist dictator and reinstall the former president; two polar-opposite mercenaries. It could have been a controlled experiment. It was in fact a Greek tragedy, complete with hubris and a stunning twist of fate.

If you want to read a full account of Hoare’s battle plans, I recommend his memoir The Seychelles Affair . Suffice it to say that he and his 43 men were to fly into to the Mahé airport disguised as a vacationing South African charity club called Ye Ancient Order of Frothblowers (note the AOFB logo on the bag in the picture below). Their agents on the island had found a few sympathetic customs agents and bribed them, and the mercenaries’ guns would be hidden under false bottoms in their luggage anyway. After they made it through security, it would only take a few hours to seize the radio station, the army barracks, and the relevant government buildings. The coup would be over in less than a day, just like Denard’s. 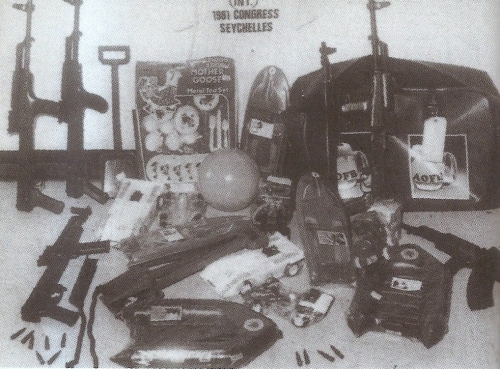 It should have worked, and it would have worked if not for a bizarre stroke of bad luck. The chartered plane landed safely and almost all of the passengers had made it through customs without a hitch. The third-to-last person in line was a French tourist not connected with the “Frothblowers,” and he had idiotically packed a piece of fruit in his bag. The customs agents found it and summoned their manager, who threw a fit and demanded that the remaining passengers have their luggage dismantled and searched. As soon as the customs manager raised an eyebrow and started tapping the false bottom of one of the Frothblowers’ bags, the mercenaries pulled out their guns and seized the airport, during which the team suffered its only casualty. The next several hours were spent in a standoff with the local Tanzanian gendarmes. In the middle of this standoff, an Air India plane arrived on the tarmac — despite several radio warnings that they were landing in the middle of a coup. Hoare persuaded the pilots to give them a lift to South Africa, since there was no longer much point in trying to salvage the mission.

After landing in Durban, Hoare and his men were detained by the South African government and eventually charged with the crime of hijacking — which wasn’t very sporting, since the South African Defense Force had been briefed about the operation beforehand and had even donated a shipment of AK47s to Hoare, after obtaining certain concessions from him. (The main one was that he not recruit too many South Africans, to avoid the appearance that the coup was a South African plot; Hoare complied.) If the Air India pilot had been called as a witness, he might have explained that Mike Hoare had never threatened him and in fact had saved his life by convincing the Tanzanian commander not to order the plane shot down during takeoff. But neither the captain nor his co-pilot ever testified. Hoare was found guilty and sentenced to ten years in prison — South African prison — and ended up serving three years. Meanwhile, Bob Denard was living like a king in the Comoros, serving as head of the all-powerful Presidential Guard under the president he had installed. In the Seychelles, René would remain in power for the next twenty years.

The moral of this story is almost too obvious: Mike Hoare bestowed his resentment on a man unworthy of it, which led him to do something stupid when he should have known better, which led him to prison and disgrace. On the other hand, his wife and kids stood by him, and so did his comrades-in-arms. Bob Denard was abandoned by all six of his wives, including the Comorian one he left behind when his patron was murdered in 1989 and he made a well-timed exit to South Africa. The portrait of his twilight years in Samantha Weinberg’s fascinating book Last of the Pirates: The Search for Bob Denard is touching but in the end rather sad — he seems lonely. The moral of his story is obvious, too.