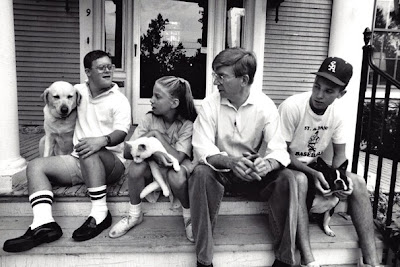 The only time I cried reading a political columnist—except when my wife surprised me with a public tribute on our tenth anniversary, but that doesn’t count—was over a wonderful piece written many years ago by George Will about his son Jon who has Down syndrome. I don’t remember the details, except that his son was eight and a huge baseball fan.  It was a touching and moving tribute and I never forgot the experience of reading it.

Jon Will is now 40.  And his father has written another splendid column that speaks to the equality of us all, that is, the exceptional nature of each and every human being on the planet.  From, “Jon Will’s Gift:”

Jon was born just as prenatal genetic testing, which can detect Down syndrome, was becoming common. And Jon was born eight months before Roe v. Wadeinaugurated this era of the casual destruction of pre-born babies. This era has coincided, not just coincidentally, with the full, garish flowering of the baby boomers’ vast sense of entitlement, which encompasses an entitlement to exemption from nature’s mishaps, and to a perfect baby. So today science enables what the ethos ratifies, the choice of killing children with Down syndrome before birth. That is what happens to 90 percent of those whose parents receive a Down syndrome diagnosis through prenatal testing.

Which is unfortunate, and not just for them. Judging by Jon, the world would be improved by more people with Down syndrome, who are quite nice, as humans go. It is said we are all born brave, trusting and greedy, and remain greedy. People with Down syndrome must remain brave in order to navigate society’s complexities. They have no choice but to be trusting because, with limited understanding, and limited abilities to communicate misunderstanding, they, like Blanche DuBois in “A Streetcar Named Desire,” always depend on the kindness of strangers. Judging by Jon’s experience, they almost always receive it.

I once cared for and lived with a developmentally disabled man who became so from a bad case of German measles at a very young age that also left him subject to frequent grand mal seizures.  He was the best human being I have ever met. Caring. Loving. Earnestly wanting to pull his own fair share. Forgiving.  Kind.

People like Jon Will and my now late friend bring out the best and worst in others.  I used to take him grocery shopping with me.  He had a very sharp hat that he loved wearing. So on it would go and we would hit the Safeway.  And everyone would always be so nice and caring—which I came to see as his great gift to them.  If it is true that what goes around comes around, and I believe it, then my friend created a space for them to plant seeds of unconditional love that would, I believed, in some manner redound to their benefit.

(When he was institutionalized before I met him, some of his caregivers had also been unbelievably sadistic toward him.  I mean, physically abusive and cruel.  When I think of them, I hope that karma doesn’t exist for they will be in for a terrible reaping.)

We should ponder that as our society conducts a search and destroy mission to wipe people like Jon Will off the face of the earth.  And it won’t end with eugenic abortion.  The odor of infanticide is on the wind too.  Not only that, but people like my friend who become developmentally or cognitively disabled after birth could well also be targeted one day for mercy killing or refused necessary medical treatment toward the end that they die sooner rather than later.  It has happened in history before. And with people like Terri Schiavo, it is happening here and now.

The antidote to the eugenics and utilitarian poisons is human exceptionalism, as Will notes:

This year Jon will spend his birthday where every year he spends 81 spring, summer and autumn days and evenings, at Nationals Park, in his seat behind the home team’s dugout. The Phillies will be in town, and Jon will be wishing them ruination, just another man, beer in hand, among equals in the republic of baseball.

We should treasure these people and welcome them in our midst.  Alas for us that too often, we don’t.
0
Print
Email
Prev Article
Next Article