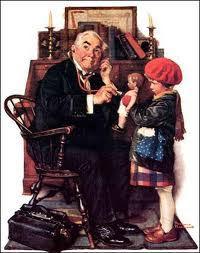 Why should we believe anything the Medical Establishment tells us anymore?  For years we have been told, screen for cancer, get annual physicals, wellness exams, pap smears, etc. beyond etc.—that’s the ticket to better health and lower healthcare costs.

Then, we had the move to centralized control.  The money paradigm changed, Obamacare became the law—and suddenly we are increasingly being told that screenings aren’t necessarily good, they often cause more harm than good because of false positives, etc.—even as the president forces private health insurance to pay for free services, such as domestic violence screening and non therapeutic sterilizations.

And now, it is don’t get an annual physical exam.  From, “Let’s (Not) Get Physicals,” by NYT’s environmental reporter, Elisabeth Rosenthal:

So why do Americans, nearly alone on the planet, remain so devoted to the ritual physical exam and to all of these tests, and why do so many doctors continue to provide them? Indeed, the last decade has seen a boom in what hospitals and health care companies call “executive physicals” — batteries of screening exams for apparently healthy people, purporting to ferret out hidden disease with the zeal of Homeland Security officers searching for terrorists

Gee, I don’t know. Maybe it is because we have been told just the opposite for decades about the annual exam, and unlike our European cousins, we aren’t sheep. We don’t just follow because the shepherd changes paths. Stupid us!

And did you notice how Rosenthal conjoined a normal annual physical with “executive” exams that use things like CAT scans?  But to the best of my knowledge, executive exams are not paid by health insurance or Medicare, like routine physicals. Such asymptomatic hyper screening comes out of the patients’ own pockets. So why conflate them? To get you to think that annual physicals are extravagant.  It’s a propaganda trick.

Expect more of this.  It is all part of the drive to reduce individualized care and replace it with decisions made by central control using criteria that may have little to do with what is right for us as individuals. The whole thing is about more, actually less, than optimal care:

This year the American Board of Internal Medicine Foundation joined forces with Consumer Reports to compile a list of basic medical tests and procedures that are often performed but that don’t add value. The project — called Choosing Wisely — already has a list with dozens of entries, and more will be added in the fall.

Ret alert! Red alert! What is meant by “value?” It’s not about what is best for individual patients! From the Choosing Wisely Website:

Choosing Wisely is part of a multi-year effort of the ABIM Foundation to help physicians be better stewards of finite health care resources. It continues the principles and commitments of promoting justice in the health care system through a fair distribution of resources set forth in Medical Professionalism in the New Millennium: A Physician Charter.

Bingo!  And we come to Obamacare, do we not?

I trust my own doctor, not the recommendations of technocratic studies that aren’t in the least about what is best for me. But as for the Medical Establishment and the growing technocratic class that confuses social justice with medical professionalism: I trust them not! Indeed, I believe they are more than willing to accept bad outcome for some individuals—including deaths from diseases that would have otherwise been caught—if it means serving “social justice/cost cutting” goals.

Speaking of which: How many of us know people whose as yet asymptomatic serious illnesses were discovered in annual exams? I can think of two in just the last few years. A relative discovered he had diabetes from an annual exam, and he was very fit, exercised regularly, and had no apparent risk factors. My neighbor’s colon cancer was similarly found very early because he was anemic in his blood test during his annual exam and that led to the discovery. And he felt fit as a fiddle! Don’t tell me annual physicals don’t help.

By the way, this whole thing had the odor of a George Soros agenda, and so I did a little Google searching. Indirect Bingo! I found several examples (here’s one) in which the ABIM Foundation—which is behind Choose Wisely—partnered in funding research projects with the Soros-funded Institute on Medicine as a Profession (IPAM).  It also recommends IMAP materials on its Web site. Not a coincidence. Birds of a feather and all that.
0
Print
Email
Prev Article
Next Article