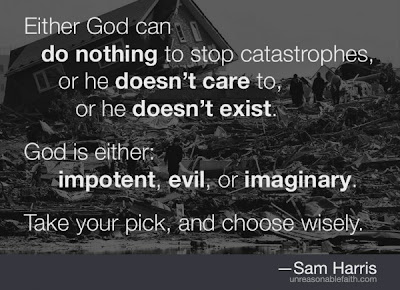 It is not surprising that many of the most notable anti human exceptionalists are atheists. By attempting to deconstruct those uniquely human moral attributes that distinguish us from animals, they hope to make God go away.  Ironically, that would elevate us back into superiority since in a Godless milieu, our unique “god-like” capabilities would make us even more remarkable, since there would be no theists around urging humility in the face of a Creator.

The atheist Sam Harris has been a leader in this quest. But now, in his latest book, he is working at cross purposes with himself by denying the reality of free will. From the NYT book review of his new book Free Will.

His absolutist position, I should add, because, as he puts it near the beginning of the book: “Free will is an illusion. Our wills are simply not of our own making. Thoughts and intentions emerge from background causes of which we are unaware and over which we exert no conscious control.” We assume that we could have made other choices in the past, Harris continues, and we also assume that we consciously originate “our thoughts and actions in the present. . . . Both of these assumptions are false.”

But wait a minute: Harris has previously asserted, apparently in the wake of the Japan tsunami (see embedded quote above), that we should “choose wisely” whether or not to believe in God.  But how can we choose wisely if we have no free will? If our thoughts are not our own, how can we choose to believe or not believe anything?  If indeed we believe what we believe because of physical forces about which we are not aware and over which have no control, then what justifies Harris so pointedly looking down his nose at theistic believers?  It’s not their fault! Moreover, how can atheists be proud of their supposedly “free thought?”  If there is no free will, than “free thinker” is nonsensical.

Denying free will would have terrible consequences for human society.  But let’s not get into that now.  Rather, let’s notice how those who deny free will also advocate that humans accept their beliefs and take actions according with their moral and ideological views—and if we do, we can make a better world (as in this example)! It’s all so ridiculous.
0
Print
Email
Prev Article
Next Article