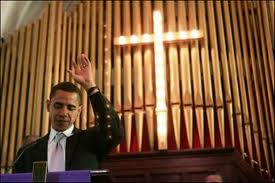 I posted the other day about a federal judge granting a preliminary injunction against the “Free Birth Control Rule” to Hercules Industries and its owners, the Newman siblings, because it impinges on their freedom of religion as protected by Religious Freedom Restoration Act.  But when I read the decision, my protect-American-liberty! hackles stood at attention. The Obama Justice Department actually argued that because the Newmans had incorporated their business, they lose their religious liberties under the RFRA in the context of operating their business!

Not surprising, given that Obama is striving to shrivel freedom of religion into a mere freedom of worship. But, that aspect of the case had received no attention of which I was aware, and so I decided to sound the alarm in the Weekly Standard.  From, ”A Religious Freedom Election:”

In the spare reporting about the injunction, few noted the Obama administration’s audacious attempt to emasculate RFRA by claiming that because the family does business as a corporation, RFRA does not apply. “This argument relies upon two key premises,” Judge Kane noted:

First, the government asserts that the burden of providing insurance coverage is borne by Hercules [as distinguished from the Newland siblings as individuals]. Second, the government argues that as a for-profit, secular employer, Hercules cannot engage in an exercise of religion.

In other words, the Obama administration argued that upon entering commerce through a juridical entity such as a corporation, individuals forgo the religious liberty RFRA was enacted to protect.

The court declined to decide the question of whether a corporation can have religions freedom for the time being, since its owners were impacted sufficiently to justify the injunction:

But that doesn’t settle the matter. And it raises an important question: How would a court determine a corporation’s “religion” under RFRA?

Large, publicly held corporations such as Google or General Electric probably would not be found to have a particular religious belief, given that such companies are owned by millions of individual and institutional shareholders. In contrast, closely held private companies like Hercules Industries will often be able to demonstrate that their owners share a common religious belief, which should then also be attributed to the corporate entity for RFRA purposes.

And that makes the upcoming election crucial, not just for the future of our economy, but for religious liberty:

The Newland case makes clear that the elections this fall could not be more important for religious liberty. The contrasting viewpoints of the likely judicial nominees of each potential president are obvious. But in addition, a first-term Romney Justice Department would almost surely take a view of religious liberty diametrically opposite that of a second-term Obama DOJ. Romney—who has praised the Newland injunction—would surely scrap the Obama administration’s pinched “freedom of worship” in favor of the Constitution’s “free exercise” of religion.

But it isn’t just the presidency. The makeup of Congress is also crucial. If a court ever rules that juridical entities are not covered by RFRA, Congress will have to amend the law to ensure that religious employers retain the freedom to conduct their businesses in conformity with their religious convictions. Under a Majority Leader Reid and a House speaker Pelosi, good luck with that!

For the sake of liberty, the political Left’s bitter hostility to religion must not be allowed to prevail.
0
Print
Email
Prev Article
Next Article