Whit Stillman fans know that his first three films are a loosely connected trilogy of sorts, with THE LAST DAYS OF DISCO being the film that ties them together by means of our meeting key characters from the other two in its Club. How then, does his recent DAMSELS IN DISTRESS, a rather stranger film and one made more than a decade after the others, work with the earlier films?

The way I propose is that it caps off another trilogy, a more thematic one concerned with social dance. This trilogy is composed of METROPOLITAN’s portrayal of the debutante dance scene in late 60s or very early 70s, THE LAST DAYS OF DISCO’s re-evaluation of the disco scene of the late 70s and very early 80s, and DAMSELS IN DISTRESS’s consideration of how hard it is to start a dance craze in contemporary times . So BARCELONA is the odd film out.

This makes sense if we realize that while the METROPOLITAN to LAST DAYS to BARCELONA sequence is about Stillman’s generational cohort of preppies or U.H.B.s (“Urban Haute Bourgeoise!”), and how they dealt with the impact of the Revolution. The first two are about how they dealt with it in the context of their own American society, whereas the last is about how they dealt with it overseas, in the context of contemporary Europe, anti-Americanism, and International Relations (romantic relations especially). It is portrait and examination of Stillman’s own experience and that of his peers. Stillman himself experienced all three of the social contexts in question.

BARCELONA can only really comment on the Spanish/Catalan social scene by looking from the outside in, and the main characters eventually “carry off the women” to a happy Shakespearean ending of marriages in America. It does have observations to make about that scene, including the place of social dancing within it, but dance is not a major thematic element the way it obviously is in the other two films, and in DAMSELS.

Among other things, DAMSELS is Stillman’s first attempt at social commentary about a generation and context definitely not his own. Yes, the action takes place at a Northeastern liberal arts college, “Seven Oaks,” but as I’ll argue elsewhere, one of the film’s points is how remarkably dumbed-down a place this generalized lib-ed college is once you scratch the surface. Moreover, some of the students seem to be from the prep-school background, but there is no evidence that most of them are. The main character, Violet, outrageously quirky-snobby in the Stillmanian mode, kind of a contemporary version of the Nick Smith character presented in METROPOLITAN, turns out to be the daughter of impoverished writers. There’s every reason to think she’s attending on financial aid. She and her cohort do not regularly speak of “Harvard guys” or the “deb scene,” nor do they hail from the Upper East Side. They are not in Charlotte’s and Alice’s class, nor do they have prospects as promising as Ted and Fred. 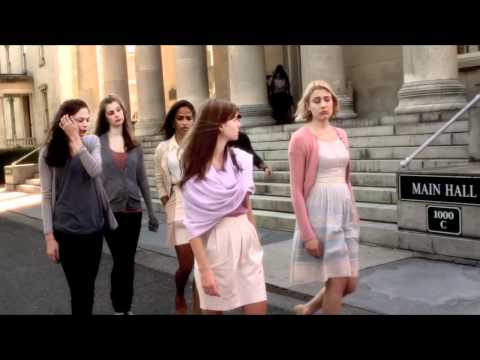 In Stillman’s judgment, they and their peers are in a rather distressing situation. There are many suicides. Boorish behaviors abound. Many agree that books like Tom Wolfe’s I Am Charlotte Simmons accurately describe the basic situation, and Violet and her group leave one frat party congratulating themselves on showing the boys a good time without “anything terrible happening,” apparently the more usual pattern of such parties. The Sexual Revolution and the Democratization of Everything has won . The set of connections and practices that constituted Society has been dead for some time.  Coherent liberal education?  Gone.  There is no point anymore for a Stillman script to wryly question and worry about society-wrecking trends . Rather, the order of the day is simply to live life as well as one may amid the wreckage, to rebuild, and with precious few resources for doing so.

Violet’s main prescription for what ails Seven Oaks is social dancing. She seeks to start a new dance craze, the “Salumbo.” And, she fails . You might not notice the failure, given the film’s fantasy-ending wherein everyone winds up dancing, but the actual night she tries to debut the Salumbo at a dance bar, nobody comes. She tells a professor that the Charleston and the twist were started not by communities, but by individuals; but a little investigation, which the film’s closing “footnotes” hint at the necessity of, proves that she is only partly correct about that. Yes, the Charleston was pioneered by one Kathryn Wilson, but the steps that made it up were taken from existing Negro dances, and the name originally came from a James P. Johnson song. It’s basically the same story with the twist, the story of anonymous black dancers having professional entertainers and impresarios package and sell their probably individually-innovated and yet collectively-developed moves to others. But what is even more important is that both dances were introduced into already active social dancing scenes, of established clubs, record-buying patterns, “going out” patterns, etc., primed to receive them. Yes, an individual might have been behind the step’s breakthrough, but it was only a broader social context that brought its elements into existence and then allowed it to become a “craze.”

Violet’s failure to establish the Salumbo, and the broader social-context reason behind this failure, is underlined by what she does have success with, and at the very same bar: she gets a number of her collegiate friends to join in with an already going dance scene, a Texas-slide thing. Country music to the rescue! Perhaps not exactly what Stillman nor Violet would most prefer, but something that works. Because it is already going.

One of the points of DAMSELS is that the social dancing practices of Society that made the deb balls possible, and which dance-wise received a brief revival/reworking during the classic disco era—i.e., musically and socially reworked in a more democratic and improvised manner—are now almost completely dead. Stillman is right that an effort to get something new going is absolutely imperative, and yet, can feel pretty Quixotic. I would add that it has to be something that can socially compete (and to some extent by taking over from the inside) with a) the frat-based party scene, b) the college bar scene, c) the overwhelm-the-senses disco club scene, and d) the rock scene, both “indie” and more mainstream. That is, a successful Violet would need all kinds of musician and social-set allies. Most especially, young hipster-creative types convinced by the likes of my Songbook or Stillman’s films that rock is played out , and that it only gives you so much.

The Songbook insists that the Rock Phenomenon, part of the larger Pop Music Phenomenon, cannot be understood simply as a musical one. It is connected to a whole set of social practices. Is connected to our desires for heroism and nobility . To our attitudes towards and practice of friendship and group social life and, especially, eros . Perhaps in every one of those areas, stereotypical Rock practices are in diametrical conflict with Social Dancing ones.

This is why it really could help Violet and her generation if more social conservatives, Porchers, dorm supervisors, student-activity administrators, school boards, and especially more Christian youth leaders, would consider the very practical sort of advice available in my second-favorite self-help book, The Jane Austen Guide to Happily Ever After , by Elizabeth Kantor.

Alas, I see it is going to take another post or so to explain what I mean, and to give Mrs. Kantor her due. But I’ll leave you with a few tastes from her:

. . . we educated, liberated, successful American women of today . . . [are] also suffering from some flaws in modern social arrangements. This is where Jane Austen heroines have a terrific advantage over us. Whatever their difficulties, at least they had the benefit of a social scene deliberately organized to bring women into contact with interested men without putting them under a lot of pressure to get too close too early.

Kantor agrees with certain suggestions from Austen that the (relatively new) “assembly balls” and “country dances” held in many towns in Britain provided a kind of “Trial Marriage”:

Agreeing to dance with a man was “accepting him” on a temporary basis. A woman got to try out being courted, won, enjoyed, and cherished, by a particular man—without the risks inherent in our more intimate and unregulated trials and errors in love. The physical nature of the dancing contributed to the trial-marriage aspect of the experience.

. . . Ironically, it was the limitations that allowed the freedom. . . . They made it safe (well, relatively safe—as safe as such an inherently life-altering thing can be) for women to fall in love. Partly because the rules allowed women to get just close enough to men, but not too close. And partly because those same rules facilitated some up-front screening of the male population. . . . True, there was chaperonage from older married women. But Jane Austen . . . expects her heroines to realize it’s ultimately their job, and not the responsibility of their mothers or married sisters, to police their own love lives. . . . for avoiding men who are obviously bad bets.