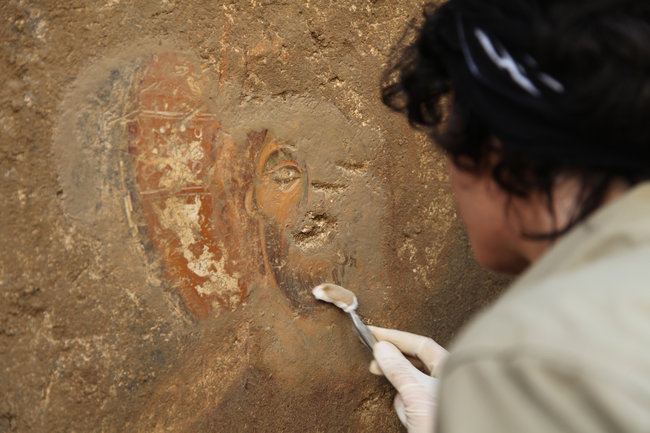 Archaeologists in Turkey are uncovering well-preserved remains of Myra, home of the beloved St. Nicholas in the third and fourth centuries. From the New York Times :

Archaeologists first detected the ancient city in 2009 using ground-penetrating radar that revealed anomalies whose shape and size suggested walls and buildings. Over the next two years they excavated a small, stunning 13th-century chapel sealed in an uncanny state of preservation. Carved out of one wall is a cross that, when sunlit, beams its shape onto the altar. Inside is a vibrant fresco that is highly unusual for Turkey.


The chapel’s structural integrity suggests that Myra may be largely intact underground. “This means we can find the original city, like Pompeii,” said Nevzat Cevik, an archaeologist at Akdeniz University who is director of the excavations at Myra, beneath the modern town of Demre.

Myra, already largely abandoned by the thirteenth century, appears to have been buried in river sediment after several heavy seasons of rain, which accounts for the consistent quality of preservation throughout the chapel. Much of the remains are under existing buildings in the modern Turkish city of Demre, making further excavation difficult; thus far they’ve been buying property from willing local residents.


Cevik was in the news a few weeks ago when he called on the Vatican to return the bones of St. Nicholas to Demre. His relics remain in the Basilica di San Nicola in Bari, Italy, where they’ve been since they were taken from Turkey in the eleventh century during the Byzantine-Seljuq wars.