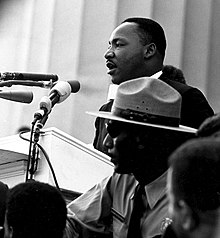 When it comes to mixing religion and politics, I’ve often thought, the principle seems to be, it’s wrong when the other guy does it. For example, conservatives become annoyed when Christians call for liberalizing immigration laws or for universal healthcare. Don’t impose your religious beliefs on society! When Christians argue for abortion restrictions or against same-sex marriage, by contrast, conservatives don’t complain too much. And it works in reverse. In fact, in my experience, liberals have a greater blind spot about the subject. Liberals object vigorously when conservatives like Judge Edith Jones  defend capital punishment on religious grounds , but go strangely quiet when liberals, like President Obama, cite Christianity’s influence on their policy positions.

Here’s a good example of the liberal discomfort with religion from a  New York Times   profile  of Barnard College sociologist Jonathan Rieder. According to the  Times , Rieder, an expert on Martin Luther King, has focused on an aspect of King’s thought that receives little attention from scholars: King’s Christianity. How, you might ask, could King scholarship ignore Christianity? The man was a Christian minister. The  Times  explains:


Dr. Rieder’s book stakes very specific turf in the corpus of King scholarship with its relentless focus on Dr. King the preacher. By doing so . . . Dr. Rieder is restoring the overtly religious element to Dr. King and the freedom movement. While African-Americans readily grasp the link, many white liberals diminish or ignore it out of discomfort with religion being granted a role — even a positive one — in political discourse.

“The image of liberal secular King misses the essential role of prophetic Christianity,” [Rieder] said in a recent interview. “Jesus wasn’t just an interesting historical figure to King. He saw Jesus as a continuation of the prophets. He has a powerful association with Jesus.”
Would America have had the civil rights movement without Christianity? It’s impossible to know, of course, and it’s true that Christian support for King wasn’t uniform. But it’s crazy to ignore Christianity’s profound influence on King and, though him, the movement as a whole. The willingness to do so says a great deal about the state of scholarship in America today.