I mentioned the new biography on Duke Ellington in an earlier post, and this weekend NRO has an interview with its author Terry Teachout, titled Duke 101 .  I can’t recommend the book enough—the interview highlights some of its contributions, and begins to suggest why Teachout is the perfect man for the job.

Some of you don’t know why it’s such an important job, because you don’t really know the music behind the fame—perhaps I can provide some help with that today.

Kathryn Lopez at one point asks Terry his favorite Ellington piece, and he picks “Koko,” a choice which puzzles me. Critics always seem to love it, but I don’t think it all that special, and prefer a dance-streamlined 50s version of it to the 40s original. I don’t mean to elevate my own perspective above that of typical critics, as reading Teachout puts me at number of points in grateful awe of his more careful listening instincts, and of his real music education. Just strikes me as an odd choice.

And it strikes me as a poor choice for introducing listeners to Ellington, as it belongs to the more self-consciously artier side of his work, which of course all real Ellington fans learn to appreciate, but which at times can repel initial listeners, particularly some of the pieces that veer into formlessness or pointless modern dissonances.

Teachout’s biography is in fact particularly strong in modeling how this side of Ellington, which many times he over-did and over-sold, can be evaluated without becoming fawning. He certainly regards Ellington as a genius, and by no means dismisses his artistically ambitious side (the way the Count-Basie-loving John Hammond did, for example), but he emphasizes his shortcomings in long-form composition, due to deficiencies in his understanding of classical music. So I can’t tell you yet whether he will wind up opposing or endorsing the essence of this Ralph Ellison quote I once used :

I have no idea where we will all be a hundred years from now, but if there is a classical music in which the American experience has finally discovered the voice of its own complexity, it will owe much of its direction to the achievements of Edward William Ellington.

But let’s save such questions for Duke 401, okay? My point here is I don’t think the usual listener who first encounters the Duke via one his “suites,” or through numbers like “Koko,” is going to quite catch the magic, the magic which the popular audience caught all through the 20s-50s.

Another barrier to Ellington-appreciation is that there are a ton of B-level recordings out there. He had a long career into the early 70s, and by the mid 50s, virtually any move his orchestra made was recorded. For an Ellington classic like “In A Sentimental Mood,” there is thus something like twelve different versions released somewhere over the years, here an inspired modernized re-arrangement, and there a pat insertion of it into a live set, or even into a “memory lane” medley. This abundance of versions makes it easy for mediocre compilations that plausibly claim to be Ellington’s Hits to be put together. It’s best to begin with the original releases, and then explore recommended later re-workings. 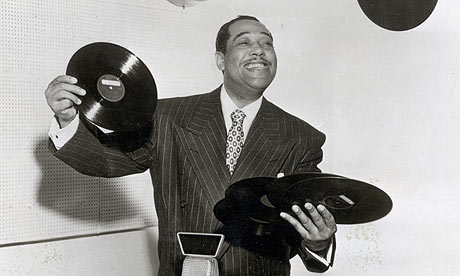 The better recordings I know of are these. (There are some good compilations available—I would seek out the Ken Burn’s Jazz selection of Ellington for one—also, the download-only compilations that many of my you-tube picks link to look as if they’ve been judiciously selected.)

A. The Blanton-Webster Band 3CD set

B. Duke Ellington and his Orchestra at Newport (I’d stick with the original 1956 track selection of only the “festival suite” and the two other numbers)

C. Duke Ellington and His Famous Orchestra, Fargo, ND, Nov. 7, 1940 (This live performance has more than a few rough spots, but it is one of the high-water-mark-moments of American popular music. At times I’ve even felt it might be the high-water mark.)

That’ll do for a start. And do play the pre-50s recordings LOUDLY.

And here’s a few of my favorites, both originals and arrangements, that come to mind today, and which are deliberately selected from Duke’s dance-floor side, as opposed to his artier, romancier, and bluesier sides. I also try to veer away from the mainly-Strayhorn compositions (“A-Train,” etc.), although one Mercer Ellington work gets in there.

Shocking that many of these have so few hits on you tube—gotta educate the young ones!

2. “Dimenuendo and Crescendo in Blue” (Live at Newport)

Whew! Whatta band! And I say you’re best off steppin’ into its full range of riches via the swingin’ gate.

And your favorites? Especially you dancers . . .