…an exciting, spontaneous musical movement was beginning to emerge within the communal Jesus houses in Costa Mesa, Huntington Beach, and Riverside. “We sang every day… …people were making up new songs all the time.” And the new songs were not chained to the traditional conventions of hymnody; members were writing gospel lyrics “to things like Coca Cola commercials.” By June 1968… ….guitars were making regular appearances in Calvary Chapel’s services, along with some of the songs grown in the communes.

That’s one of the first “praise music” recordings, and it features “Seek Ye First.” A dear one from California evangelical circles tells me that in the early 80s “nearly all our friends owned that album.”

Of course, it was less important to own records than it was to own an acoustic guitar. One bible, one guitar, a couple changes of clothes in a back-pack, and of course sandals, that was all you needed.

Oh, and maybe a songbook: 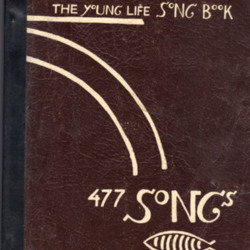 Now I know Karen Lafferty is not rock music, the same as Joan Baez is not. The main point of my Baez post is in fact the same as this one. My hypothesis is that in the folkie movement, a movement whereby modern middle-class persons adopted the voice and music of “Weird Old America” rural provincials, for quasi-political aesthetic reasons, but also as an exploration of their own idea of authenticity and spontaneity, you have a forerunner and a father of what would happen on a much wider scale with rock.

We cannot regard that change as just another trend, as many did at the time, because for one reason, we can see that it was connected at the hip with a revolution in church music. The California Protestant folks were only about six years behind the red-diaper NYC folkie folks, and “following Joan” was by no means a temporary thing, but heralded a new approach to Christian worship song that remains with us.

But back to the story—the quote above is from a fine article from Christian History a few years back, on the origins of Praise Music, and it continues the account of the happenings at Calvary Chapel in 1968:

Within a few months there was a distinctly new, contemporary tone to the worship at the burgeoning church. Swarms of youth were soon packing its 300-seat sanctuary for multiple Sunday services and several weeknight Bible studies. For many of the kids, this new brand of “church music”—simple, melodic, heavily reliant upon Scripture for its lyrics—was the key to their attraction. Tommy Coomes, a member of a down-on-its-luck hippie band named Love Song, recalled visiting the church for the first time and finding the music there utterly unique: “I knew each line even before it was sung. I wasn’t used to simple music like this, but it blew me away! It was a music which drew people into the Lord’s presence.”

Not surprisingly, the church began to develop and attract a growing stable of in-house musicians and songwriters. One was Karen Lafferty, a Southern Baptist girl from New Mexico. Convinced that she should pursue a musical ministry, she gave up a lucrative gig serenading diners... Scrounging to find teens for guitar lessons, Lafferty quickly became discouraged. But after one particularly inspiring worship session and Bible study in the fall of 1971, she went home, picked up her guitar, and applied a tune to the words of Matthew 6:33:

And all these things

Shall be added unto you,

“Seek Ye First” became a major hit at Calvary Chapel and quickly spread by song-of-mouth to Jesus People homes, coffeehouses, and “fellowships” all over Southern California—and then across the country.

I remember singing it in the youth group of my otherwise pretty staid Presbyterian church in the late 70s and early 80s. It was still one of the standards we relied upon in InterVarsity Christian Fellowship during my involvement in the mid-to-late 80s. And unlike most of the songs I write about in the Rock Songbook, it will almost certainly remain sung centuries hence. If its simplicity can repel if heard too often, its overall quality as a worship song speaks for itself—here is a nice choral version. Perhaps only “Create in Me a Clean Heart” or “As the Deer” are more tried and true numbers in what we could call the Praise Music Songbook.

Now you’re welcome to say what you want in the comments about the overall development and widespread use of Praise Music, which over time incorporated a lot more rock elements. Overall, I think it has harmed Christian worship more than it has helped. My main gripe, as to the way this music has developed, is that it has made evangelical worship so much more dependent on emotion, on the affirmation that one is feeling these high feelings about Jesus right now.

The old hymns, with their emphasis on doctrine, on truths that you can have the faith to affirm in song, even if you’re not having those super-high feelings, and that in a way slowly bring you up to uninhibited worship but tend not to force you into it, point to what Praise Music tends to lack.

Insofar as Praise Music is more meditative, more wedded to the Biblical texts, that is, more like “Seek Ye First,” the more it can function like the better of the old hymns.  The contemporary Praise Music that seems most hymn-like (or black-gospel-like) is the sort I like best—about five years ago, I was blessed to hear a newer song of this sort, “Speak, Oh Lord,” written by Keith and Kristyn Getty, and have since enjoyed singing it in services—it requires a choir do it real justice.

But I did not write this post to gripe or lament about most Praise Music, nor to praise the best of it—for one, I just don’t know that much about it, hymns, or Christian worship history.

Rather, I am highlighting the praise music departure here to point to its following a folk music originated change that helped create rock music.

My Rock Songbook has posited at least three big changes in aesthetic attitude and approach evident in the 60s move from rock n’ roll to rock.

They are, first (and worst) the move toward hard-rock, motivated by the idea of exploring primality and by the belief that Sex had been the heart of the earlier rock n’ roll and blues magic; second, the move towards various forms of baroque-pop and art-rock, with the ambition of wedding R+B with fine-arts music, often of the more avant-garde kind.

But the third stream of musical change is the one that emerged most obviously in the folk movement, and it is perhaps the hardest to put one’s finger on. Here’s one attempt I made to capture it in the comments on the Joan Baez post:

What the middle-class folkies found... ...is that if you went back to the “dawn” of rural recording, 1927-1933, to a time when our pop music traditions were less homogenized and professionalized, some of those earlier artists defied category... So even though the folkies had their own formulas, they emphasized Authenticity in trying to imitate the really old time. If one was going to try to enter the heart-space of a Weird Old America …to really do it, to shed the staginess and throw one’s middle-class self into it the way a Joan would, this brought one to a strange new place. One where much more freedom in general seemed possible.

And that freedom often involved, and it certainly did for Joan, a taste for spiritual feeling and/or moral uplift not possible in regular pop, as that post explained.

More here, with The Byrds as the example.

Looking back at the Christian History piece, note that it said “the new songs were not chained to the traditional conventions of hymnody.” That is, they came with the illusion of not being tied to formula, and of belonging, like the whole folkie tradition, to “the people.”

Simplicity. Authenticity. Freedom from formula, and freedom from the association of the fine, of the poetic, with the Aristocratic or the Schooled.

For the foreseeable future, non-liturgical Christian worship, which I guess means Protestant worship especially, is going to remain torn between the praise music tradition and the older “conventions of hymnody.” Song composers who can bridge these, or who can otherwise give hymnody a more contemporary relevance or counter-cultural attraction, will be particularly needed. I would like to say they will be in particularly high demand, but I know many will find that wildly optimistic in an era in which so many congregations are now two generations into a rejection of the older musical conventions, and are apparently quite contented with this.

But like rock, Praise Music’s beginnings were more impressive than most of it is today, even if there are some excellent worship teams out there refining its best features. And similarly as well, its ongoing repetition of and captivity to 1960s-1980s forms and expectations, is increasingly going to feel old. As in wearying. Those who want to get past that feeling have got to look back to the origins, to when it seemed so obvious how to make things fresh.