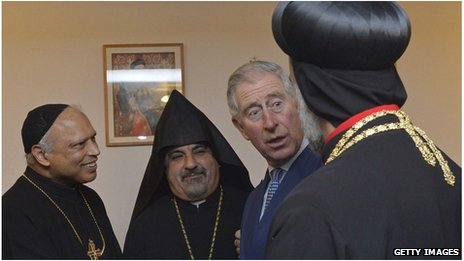 Photo from the BBC [/caption]

This year has been a dreadful one for Mideast Christians. In Egypt, Islamists frustrated at the fall of the Morsi government have singled out Copts for vengeance. By some accounts, Copts are suffering the worst persecution they have experienced in 700 years. In Syria, Islamist rebels are targeting Christians, whom they accuse of siding with the Assad regime.  In Iraq, Islamist gangs demand exorbitant protection money from the few Christians who remain–unless the Christians agree to convert to Islam. Across the region, Christians are being kidnapped, driven from their homes, killed. Their churches are being burned, their schools bombed. Christianity faces an existential threat in the place where it was born.


“It seems to me that we cannot ignore the fact that Christians in the Middle East are, increasingly, being deliberately targeted by fundamentalist Islamist militants,” he said. Noting Christianity’s roots in the region, the Prince observed that today the Middle East and North Africa have the lowest concentration of Christians in the world—just 4 percent—and that this has “dropped dramatically over the last century and is falling still further.” He said that the effect of this was that “we all lose something immensely and irreplaceably precious when such a rich tradition dating back 2,000 years begins to disappear.”


The BBC’s report of the Prince’s meeting is  here .
0
Print
Email
Prev Article
Next Article