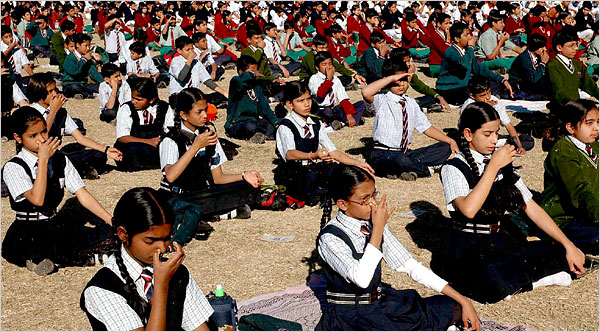 Last summer, I wrote about a constitutional challenge to  yoga classes in California public schools . When a school district near San Diego added yoga to its elementary-school gym program, some parents complained. Yoga, they said, is a Hindu discipline, and including it in a compulsory gym class violates the Establishment Clause. A state trial court disagreed, holding that the school district had removed all religious references, so that what remained was simply a stretching class for kids.

It turns out that similar litigation is unfolding across the world in India, the place where yoga originated. But there, the courts appear to be taking a harder line. The plaintiffs in the Indian case want that country’s Supreme Court  to order public schools to include yoga  in the curriculum. They cite a 2005 study showing that yoga is important for students’ mental and physical health. The Supreme Court hasn’t ruled yet, but  has expressed concern  about ordering public school students to take yoga classes. Why? Because Indian public schools are officially secular, and yoga is a religious practice. At oral argument this fall, the court said that parents from minority religions—Christianity and Islam, for example—might object to a requirement that their children engage in Hindu exercises at school. The court has asked representatives of the minority religions to appear in the litigation as third parties to state their views.

What explains the different reactions of the American and Indian courts? Much has to do with the different cultural understandings of yoga. Here in the U.S., most people who do yoga don’t think of it as religious. Spiritual, yes, in the sense that it creates a sense of inner peace, but not religious. Oh, people may understand that yoga has Hindu roots and that some elements,  like the salutation to the sun god and chanting the word “Om,”  have religious meanings. But these aspects of yoga intrude very little on their experience. “Sure, yoga is religious for some,” they might say, “but not for us. Maybe other people think they’re greeting the sun god, and that’s fine. But we’re just stretching.” So when a public school says it has removed the religious elements of yoga and retained the secular, most Americans would find that position plausible.

The difficulty is that yoga, as traditionally understood, doesn’t work that way. In traditional understanding, yoga is  itself  a religious act. The postures  themselves  lead the practitioner to God, whether the practitioner intends this or not. In traditional understanding, in other words, one can’t separate the religious and secular aspects of yoga and one really shouldn’t try. Indeed, some American Hindus object to the way our popular culture treats yoga as a designer gym routine. Much as many American Christians seek to “Keep Christ in Christmas,” the  Hindu American Foundation  has mounted a campaign to “Take Back Yoga” for the faith.

Perhaps yoga means one thing in one cultural context but something else in another. You’d have to think, though, that judges in yoga’s home country have a pretty good sense of what the practice is all about. The parents in the California case, who have appealed the trial court’s ruling, might want to have a look at the Indian court’s ultimate decision.