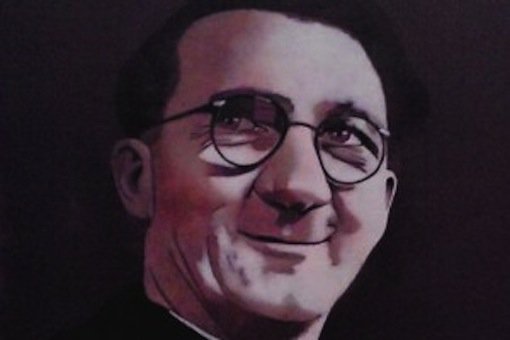 Late last month, people from all over the globe gathered in Killarney, Ireland to honor a man who died fifty years ago, but whose legend has grown with each passing year: Monsignor Hugh O’Flaherty, Ireland’s heroic priest who rescued some 6500 people in and around Vatican City during the German occupation of Rome.

Few would have expected the path life had planned for the young Irishman. Born in 1898, he was the first of four children to James and Margaret O’Flaherty, an Irish Catholic couple who brought their children up in the faith during “the Troubles”—the intense battle between Irish Catholics and Protestants. Young Hugh was singed by this conflict when several of his Catholic friends were killed by the Black and Tans, a marauding group which brutally enforced British domination over the country.

Hugh’s mother was a loving homemaker, his father the steward of a local golf club who inspired Hugh to become an active and talented golfer. In those days, however, professional golf was not a realistic career for aspiring young men, so Hugh focused his attention on his other great love, his faith.

In 1918, he entered Mungret College, a Jesuit school in County Limerick, and trained to become a missionary priest. Sent to Rome to complete his studies, O’Flaherty was ordained in 1925 and became a monsignor in 1934. By then, he had earned several doctorates and learned numerous languages; and because of his special skills, was asked to become a diplomat, instead of a missionary. He accepted the challenge, and served in Egypt, Haiti, Santo Domingo, and Czechoslovakia, before becoming an official at the Holy Office, in 1938. The following year, life dramatically changed, for him and for Europe.

After the outbreak of war in September, 1939, Italy—having joined Germany—established prisoner of war camps for captured Allied soldiers, mainly British and French. The Vatican assigned Francesco Borgongini Duca, the papal nuncio to Italy, to visit them, and Msgr. O’Flaherty was brought along as an interpreter and assistant. What he saw there moved him, helping him overcome his own hard feelings toward the British. He made sure the prisoners received proper clothing and blankets, and received packages from the Red Cross. He also took to Vatican Radio to announce the names and messages of many prisoners to worried families. After he protested the conditions of several camps, however, the Italian authorities pressured the Church to remove him from P.O.W. assignments, and he returned to the Vatican. But the transfer turned out to be providential.

With the War entering a new phase, Mussolini increased the persecution of Jews, aristocrats and anti-fascists of all kinds—and they turned to the Church for help. Msgr. O’Flaherty, who had become friends with many during his days as a young student and priest, immediately offered help, finding them shelter and support. Then, in the summer of 1943, after Mussolini was deposed from power, only to be rescued by the Germans, who would soon occupy Rome for nine terrifying months (September 1943–June 1944), a radically different situation developed: Thousands of prisoners of war escaped fascist captivity and spread across the Italian countryside, but were in danger of recapture by the enraged Germans, determined to reassert power.

When Lieutenant Colonel Herbert Kappler, head of the Gestapo in Rome, and Pietro Koch, leader of the fascist Italian police, discovered what O’Flaherty was up to, both vowed to kill him if he ever stepped outside of Vatican City (which he nonetheless did—often in disguise). The Holy See allowed this operation to continue, but it was extremely dangerous to do so, both for O’Flaherty and everyone else, since the Vatican’s diplomatic immunity and protection from a possible Nazi invasion was based on its official neutrality during the war—a “neutrality” that was being circumvented every day by the priest who came to be known as “the Scarlet Pimpernel of the Vatican.” Even those sympathetic to O’Flaherty’s goals were worried his whole operation could backfire. Michael MacWhite, the Irish envoy to Italy, mentioned the Monsignor in one of his dispatches, cabling to Dublin : “It would not surprise me if he found himself in a concentration camp one of these days.”

By the grace of God, he didn’t, and when liberation finally came, O’Flaherty was honored across the globe: The United States awarded him its Medal of Freedom, and Britain named him a Commander of the British Empire. He was also offered a lifetime pension by the post-War Italian government, which he humbly declined. When he died in 1963, there were front-page tributes everywhere.

The Monsignor’s extraordinary activities were immortalized in the film The Scarlet and the Black (1983) starring Gregory Peck as O’Flaherty, and Christopher Plummer as Kappler. A documentary, “The Pimpernel of the Vatican,” was made about O’Flaherty by his grand niece, Catherine ; and three former prisoners of war, Officers Samuel Derry ( Rome Escape Line ), John Furman ( Be Not Fearful ) and William Simpson ( A Vatican Lifeline ) each wrote memoirs chronicling their collaboration with the legendary priest.

Because O’Flaherty never wrote his own memoirs, and rarely spoke about his wartime activities, some confusion initially existed over the extent of his rescue efforts—did he rescue Jews, or just P.O.W.’s?—and whether he received the backing of the Pope. But those questions have long since been answered.

In a 1963 obituary for the Catholic Herald , O’Flaherty’s close friend, Alan McElwain, who saw him every week after the War, commented: “In the finish, he was hiding not only ex-P.O.W.s, but hundreds of Jews. He saved at least 1700 Jews from the deportation or death which the Nazis meted out to others.”

O’Flaherty’s two most recent biographers, Brian Fleming and Stephen Walker , concur that O’Flaherty helped save many Jews, and witnesses have come forth to confirm that fact. Writing to a Jewish organization in 1995 which was researching these events, Sr. Noreen Dennehy, a missionary Franciscan Sister, testified (as recorded in Fleming’s book):

I am very happy to tell you that I, personally, worked with Monsignor O’Flaherty in Rome during the tragic war years when he risked his life in order to help the Jews in Rome. Time after time, Monsignor came to our Franciscan Generalate, located at that time in the Via Nicola Fabrizio on the Gianiculum. He often asked us to house the persecuted Jews. Since we had a very large Generalate, we were able to accommodate as many as fourteen or fifteen at any one time.

Sr. Dennehy went on to describe how her Superior General, Mother Mary Benignus, and her assistant, Mother Mary Marcarius, “were very much in sympathy with the Monsignor’s efforts in his noble works. It was he who gave impetus to the work: He was tireless in his efforts to help lessen the suffering of the Jewish people. He helped many people to escape hardship and inevitable death.”

Sr. Dennehy is still living, now in an American retirement home for elderly sisters; and when I contacted her, she was kind enough to speak with me and confirm all these facts. She also affirmed that her convent, acting in concert with Msgr. O’Flaherty, also received the direct support of Pius XII “to take in persecuted Jews,” an assertion that has been strengthened by recent research on this matter.

O’Flaherty’s nephew—Judge Hugh O’Flaherty, now one of Ireland’s retired Supreme Judges—spoke to me about his famous uncle’s relationship with Pius XII, too: “I do know that he held the Pope in very high regard,” and recommended military historian Raleigh Trevelyan’s book, Rome ’44 , which documents the Vatican’s support for O’Flaherty and the anti-Nazi resistance.

Magnificent as his wartime actions were, Monsignor O’Flaherty’s full stature only emerged after the War, when the notorious Colonel Kappler was convicted for his monstrous crimes. One of the few regular visitors to his prison cell was the very man whom Kappler had sought to assassinate during the War years—Hugh O’Flaherty, who was first and foremost a Catholic priest, and servant of souls. Knowing that even the most evil people in history are still capable of redemption, the Monsignor never gave up hope in rescuing Kappler from his demons, and after many years finally succeeded—receiving the repentant war criminal into the Catholic faith.

Over and above that extraordinary act, is the impact O’Flaherty has had on society at large, especially in Ireland. It’s no secret that the country has suffered from severe conflicts in recent years, scarred by Church scandals and secular intensity; but when a large and iconic statue of O’Flaherty was unveiled in Killarney last month, people from every walk of life and belief system, no matter what their differences, were there to honor him. He has become a symbol of unity, and Ireland’s shining priest.

“There can be no doubt about that,” said Jerry O’Grady, chairman of the Hugh O’Flaherty Memorial Society , in a recent conversation with me, “Everybody here loves the Monsignor.” Like Pope Francis, Hugh O’Flaherty’s inspiring life has brought people together who otherwise might have remained far apart. His enduring witness reminds us that we are all children of God, subject to his demands, but wide open to his love and mercy. And for a Catholic priest, there can be no greater accomplishment than that.