In his Poetics , Aristotle observed that some works of art have a paradoxical effect. They represent things that make us cringe and recoil: Orestes kills Clytemnestra; Medea murders her children. Yet, even as we shrink from the brutality and avert our eyes in horror, we are nonetheless strangely attracted to and sometimes ravished by the scenes. What is ugly and brutal can exercise an aesthetic power as great as”perhaps even greater than”beauty itself.

A special centenary exhibition of the work of Francis Bacon at the Metropolitan Museum of Art (on view until August 16, 2009) offers an ideal occasion to experience the strange aesthetic appeal of deformity, pain, and the darkness of life. Bacon famously filled his studio with images of disease from medical books and murder scenes from tabloids. The paintings that resulted are not ugly. On the contrary, many have alluring color and form. But there can be no doubt about Bacon’s genius. It was energized by the grotesque.

Born in 1909, Bacon drifted through early adulthood as an alienated aesthete, making his way to Weimar Berlin and Bohemian Paris in the late 1920s and early 1930s. An interest in interior design and furniture led to painting. By the late 1930s, Bacon had produced a small body of work. In the early 1940s, however, he repudiated his early efforts, and he destroyed the canvases still in his possession.

The centenary retrospective adheres to Bacon’s stricture that his early work should be excluded from his canon. 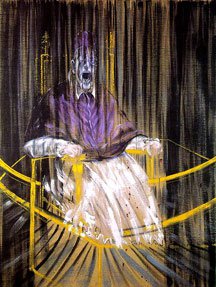 The show begins with a triptych of agony filled paintings: “Three Studies for Figures at the Base of a Crucifixion” (1944), the uncharacteristically busy and overdone “Painting” (1946), and a series of portrait studies culminating in his famous evocation of the portrait of Pope Innocent X by Vel zquez (1949).

The continuity between these early paintings and his later work shows that Bacon was not an experimental artist who bounced from theme to theme or style to style in order to keep up with the latest movements. His paintings from the 1940s serve as an effective overture to the exhibition as whole. The gaping mouth, for instance, recurs again and again. In some cases, the teeth and mouth appear as distorted forms, images that one might easily picture filling the nightmares of dentists.

In nearly all the portraits, the eyes of the figure are veiled, forcing the viewers to focus attention on the mouth. The effect is not simply to accentuate the expression of horror. The veiling is achieved with broad strokes of grays and browns that have a strong downward momentum. These strokes of muted color give the portraits a strangely dynamic quality, as if a semi-transparent film were constantly dropping down to obscure our contact with other human beings, leaving only shared pain and horror.

“Three Studies for Figures at the Base of a Crucifixion” also features the gaping mouth. But this series of painting introduces other features of Bacon’s aesthetic vision that come to the fore in later work. In this work we see three fantastical figures are presented against an empty background. Necks are painfully stretched. The figures are contorted into unnatural positions that suggest agony.

Images of stretched, distended, and puckered bodily forms set against the plain background that sets the emotional tone with color and arranged in triptych”Bacon returned to this aesthetic form again and again. “Three Studies for a Crucifixion’ (1962) shows him perfecting the idiom.

The backgrounds remain simple, but Bacon introduces windows and rooms. The figures are more obviously proportioned as human beings, and the bloody central figure is set on a daybed with striped upholstery. These gestures toward realism are reinforced by the interactions between the three panels of the triptych that evoke a narrative connection and the passage of time. The distorted bodily forms are part of the real world we inhabit.

The heightening effect of this stylized realism is even more evident in Bacon’s most emotionally powerful work, “Three Figures in a Room” (1964).

This triptych, to my mind, represents the most perfect expression of Bacon’s cruciform imagination. The figures have a cartoonish quality, and the scene is more immediate and affecting because more thoroughly and painfully human. Moreover, the three panels create compositional harmony rather than dissonance. The puckered, contorted, difficult reality of life can take on the ordered shape stable enough to endure from day to day.

Not all of Bacon’s work is agony filled. “Three Studies for a Self-Portrait” (1979“1980) exhibits a striking visual harmony, and at the same time the triptych suggests the dark inner obscurity of self-knowledge. We are uncertain, self-deceiving creatures, and yet we can and do live as coherent selves. The triptych is an artistic witness to a very difficult achievement: a self-honesty that is not at war with itself.

In his review of the centenary exhibition in the New Republic (“ Slaughterhouse ”), Jed Perl reads Bacon’s paintings as tedious expressions of modern artistic posturing. Instead of genuine art, Perl writes, Bacon produced “noirist graffiti: angst for dummies.” The images amount to “modernist melodramas,” “visual claptrap,” and “bad dreams with fashionable upholstery.” The Bacon exhibition, he concludes, offers nothing but “a nihilistic blood sport, the hideous spectacle of an artist in the process of eviscerating the art of painting.”

Strong words, but misguided. Not all of Bacon’s work succeeds. For example, he painted pictures of chimpanzees with open-mouthed expressions of primal horror. It’s not very interesting to imagine Edvard Munch at the zoo. The same holds for other pictures without human forms. “Blood on Pavement” (1988) and “A Piece of Wasteland” (1982) have a tired, didactic feel”just the sort of thing that fills Chelsea galleries these days.

The relative failure of these paintings indicates, I think, Bacon’s almost complete artistic alienation from the natural world. The exhibition presents no landscapes, no flowers in bloom, no apples lovingly arranged. Bacon seems to have been entirely focused on the human condition. Indeed, within the human condition his concerns were narrower still: Crucifixion, yes, but no Madonna and Child, no Annunciation, and certainly no Resurrection. Yet, in this domain Bacon certainly succeeded in doing a great deal more than give painterly form to the existentialist and nihilist cliches of our age. His work suggests lived reality”pain, of course, but also endurance.

Evidence for the success of Bacon and his lasting importance as an artist was impressed upon me by the happenstance that a few days before visiting the Bacon exhibition at the Met, I stopped by the Gagosian Gallery in Chelsea to see the exhibition of late paintings by Pablo Picasso . Like Bacon, the old Spanish goat had his own fascinations with the grotesque, which he often intertwined with erotic images. And like Bacon, the late Picasso had a cartoonish style. To my mind, however, they differ in emotional density and depth. Picasso’s work plays at seriousness, always winking and falling back on visual cleverness, which is why his style has been so easily incorporated into commercial art. In contrast, Bacon’s art never winks, and his paintings are much more arresting and less easily digested.

Robert Hughes cheerfully describes Bacon as “the complete atheist, anti-metaphysical, anti-transcendent. Birth, copulation, death, end of story.” Hughes knew Bacon, and perhaps his description is accurate. Yet the paintings suggest otherwise, for they are not as flat as the dime-store nihilism would suggest. The centenary exhibition shows that Bacon’s work involves more than howls of horror and exaggerated, distorted physical forms. The fundamental role of the grotesque endured to the end for Bacon as the source of aesthetic power. As many other artists have recognized, in a world without transcendent truth, horror and suffering can provide a dark universal to energize the imagination.

Bacon, however, differs from the usual weekend patrons of the grotesque whom Perl finds so tedious. As Bacon’s work evolved and his commitment to realism deepened, he added layers of tender regard for the fragility of our humanity to his fascination with pain and suffering. Human life”even human life devoid of any religious or transcendent faith”does not end quickly and simply. It’s not just birth, copulation, death, end of story. We must actually live our lives, and do so in the vulnerability of our flesh. This Bacon saw and portrayed, which is no mean artistic achievement.

R.R. Reno, features editor at First Things , is a professor of theology at Creighton University.